Judge Fails to Rule on a Divorce Issue in AZ | Hildebrand Law, PC 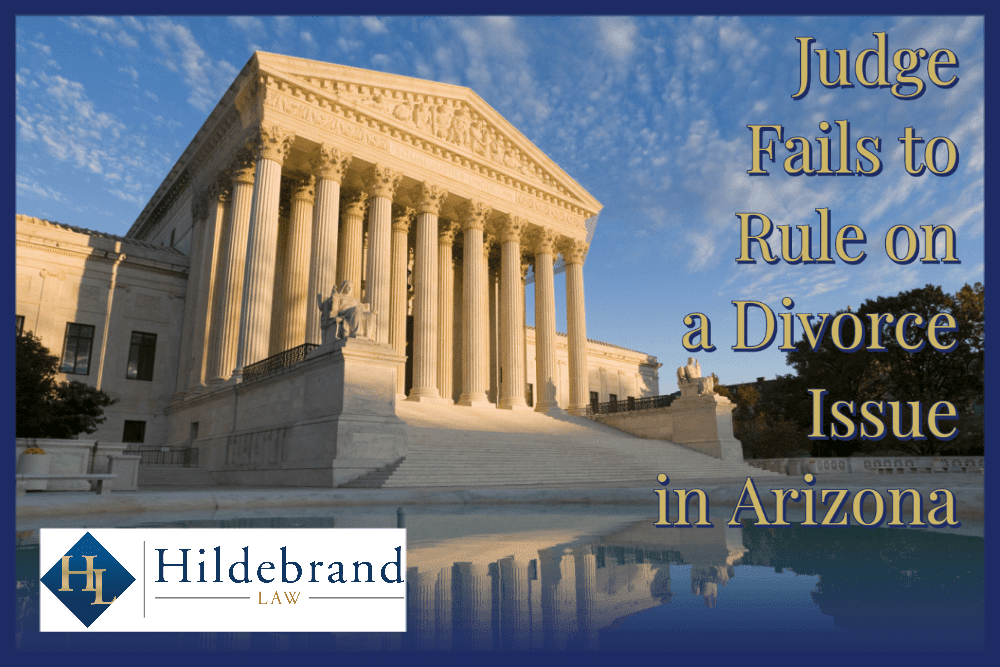 Judge Fails to Rule on a Divorce Issue

The Arizona Court of Appeals in a memorandum decision in the case of Bangiyev vs. Arzumanova had to address, among other things, a divorce judge’s failure to issue a ruling or a decision on an issue after an Arizona divorce trial.

The court also ordered Husband to pay $5,000 towards Wife’s attorneys’ fees by making $500 monthly payments beginning January 1, 2016. In March 2016, Wife filed a petition for contempt, alleging Husband failed to pay the court-ordered temporary support and attorneys’ fees. Wife claimed Husband paid only $2,329.58 of the $10,128.72 he was obligated to pay. Husband responded that he had paid some of the amounts.

The Honorable John C. Gemmill, a Retired Judge of the Arizona Court of Appeals, Division One, has been authorized to sit in this matter pursuant to Article 6, Section 3, of the Arizona Constitution. This order was entered on February 5, 2016, so Husband was immediately in arrears for December, January, and February payments.

At Husband’s request, the superior court agreed to address the petition for contempt at trial. Following a trial, the superior court ordered Wife to pay child support to Husband in the amount of $48.67 per month starting September 1, 2015, and awarded Wife $1,500 per month in spousal maintenance for two years, effective August 1, 2016.

The relevant property provisions in the decree included findings that: (1) the Scottsdale house was community property which was to be sold and any equity equally divided; (2) the parties’ community debts were discharged in bankruptcy, with no mention of an outstanding community debt owed to the Internal Revenue Service (“IRS”); and (3) “the parties share a 50% equity in Desert Equity.”

There were no findings regarding Wife’s contempt petition. Wife filed a motion for new trial, making the same arguments she now raises on appeal. The superior court denied the motion without comment, and Wife filed a timely notice of appeal following entry of a signed order.

We have jurisdiction over the property issues under Arizona Revised Statutes (“A.R.S.”) section 12-2101(A)(1). Additionally, because Wife has no adequate remedy by appeal with regards to her claim that the court failed to address the contempt petition, we exercise our discretion to treat Wife’s appeal as a special action and address that claim pursuant to Arizona Rule of Procedure for Special Actions 1(a). See Henderson, 241 Ariz. at 585.

Wife contends the superior court erred in classifying the Scottsdale residence as community property because it was purchased before the marriage and titled to Wife and has remained titled to Wife ever since.

Husband concedes this but argues the parties intended the Scottsdale residence to be their marital home and community property. The parties purchased the residence four months before the marriage.

Husband testified that the money for the down payment was a loan from his mother and that the parties placed the property in Wife’s name because her credit was better. The only name that has ever been listed on the deed is Wife’s.

Husband signed a disclaimer deed in 2005 confirming that the residence was Wife’s separate property. “In Arizona, property owned or acquired by either spouse prior to marriage is separate property and does not change its character after the marriage except by agreement or operation of law.” Drahos v. Rens, 149 Ariz. 248, 249 (App. 1985); see A.R.S. § 25-213(A); see also Bell-Kilbourn, 216 Ariz. at 523.

The parties’ use of the residence as the marital home and use of community funds to pay the mortgage and other expenses does not alter the character of the property. See Drahos, 149 Ariz. at 249. Similarly, the fact that the parties titled the property in Wife’s name to obtain favorable financing “does not alter the character of the property established as Wife’s separate property at the time of acquisition.” BellKilbourn, 216 Ariz. at 524. Husband signed two disclaimer deeds and does not claim he executed these deeds as a result of fraud. The deeds are valid; therefore, the Scottsdale residence is Wife’s separate property.

The superior court has authority under A.R.S. § 25-318 to allocate community debts. The decree stated, “the parties discharged their community debts in their bankruptcy” and further ordered that “[a]ny community debts that were not identified at the time of trial shall be divided equally between the parties.” The decree did not mention the parties’ IRS debt even though both parties acknowledged in the pretrial statement and at trial that this was a community debt for which they were equally liable.

Husband contends the fact that the parties agreed to be equally responsible for this debt meant the court did not need to address it. “Community debts not allocated by a divorce decree remain the joint obligations of the parties.” Cmty. Guardian Bank v. Hamlin, 182 Ariz. 627, 631 (App. 1995).

The parties disputed whether there was any equity in the rental properties or Desert Equity itself. There was no evidence regarding the equity in any of the properties Desert Equity owned. Given this lack of evidence as to the value of Desert Equity or its assets, the superior court could not assign a specific value to this community property.

Nonetheless, the order in the decree does not constitute a division of property. At trial, Wife’s undisputed testimony was that Desert Equity was owned by four partners, each holding a quarter interest. Pursuant to the decree, Appellant and Appellee, though no longer married, still own an undivided “50% interest.”

Wife contends the superior court abused its discretion by failing to address her petition for contempt in the final decree. Contempt findings are only reviewable by special action. Henderson, 241 Ariz. at 586- 87. Because Wife has no other remedy for review of this alleged error, we exercise our discretion and accept special action jurisdiction to address this issue. We review contempt findings for an abuse of discretion.

The superior court specifically stated it would address Wife’s contempt petition at trial. The parties presented evidence regarding the contempt allegation. Civil contempt proceedings in family law matters are governed by Arizona Rule of Family Law Procedure (“Rule”) 92. Pursuant to Rule 92(E), the court “shall enter a written order granting or denying the petition for contempt.” If the order finds “the alleged contemnor in contempt,” additional specific findings are required. See Rule 92(E)(1), (2).

Where parties do not request findings of fact or conclusions of law, this Court “must presume that the superior court found every fact necessary to support the judgment[]” if supported by a reasonable construction of the evidence. Berryhill v. Moore, 180 Ariz. 77, 82 (App. 1994).

Husband contends the superior court was not required to make any findings because the final decree “reallocated, modified, and/or terminated” the temporary orders such that “Wife suffered very little loss if any[.]” However, Rule 92 does not exclude temporary orders from contempt proceedings.

Husband also argues that because temporary orders become unenforceable once a decree is entered, see Rule 47(M)3, there was nothing to enforce. However, Wife filed her contempt petition in March 2016, during the pendency of the action. Therefore, the temporary orders were still valid and fully enforceable through contempt proceedings. See Rules 47(M) and 92.

The relevant inquiry was Husband’s knowledge of the order. Rule 47(M) states in relevant part: Temporary orders signed by the court and filed by the clerk are enforceable as final orders during the pendency of the action. Temporary orders become ineffective and unenforceable upon termination of an action either by dismissal or following entry of a final decree, judgment, or order, unless that final decree, judgment, or order provides otherwise. Ariz. R. Fam. Law P. 47(M).

The issue is whether Husband had the ability to comply with the spousal maintenance and child support orders and willfully violated the order. See Ellison v. Mummert, 105 Ariz. 46, 46 (1969). We disagree with Husband’s reading of A.R.S. § 25-315(F)(4) (providing temporary orders terminate when the final decree is entered).

A party is not relieved of contempt for violating temporary orders because the superior court did not address the contempt petition before entering a final decree. The court must consider Husband’s conduct as of the time Wife filed her petition. Wife alleged contemptuous conduct prior to the entry of the decree. The superior court was obligated to address these allegations in a separate order or in the decree.

The boilerplate denial of all prior requests for affirmative relief does not reasonably support a presumption that Husband was not in contempt in light of the evidence. Cf. Berryhill, 180 Ariz. at 82 (stating this Court “must presume the [superior] court found every fact necessary to support the judgment” when parties failed to request findings).

Husband admitted he had not made all payments ordered under the temporary orders, and the court’s payment history did not reflect payment in full as of March 2016. Husband’s spousal maintenance obligation was only modified as of August 2016, one month prior to the decree.

Accordingly, we remand for reconsideration of Wife’s contempt allegations and findings pursuant to Rule 92. Both parties request an award of attorneys’ fees and costs on appeal pursuant to A.R.S. §§ 25-324, 12-331, 12-341, and 12-342. In the exercise of our discretion, we decline to award either party attorneys’ fees on appeal.

However, as the successful party, Wife is entitled to an award of taxable costs on appeal upon compliance with Arizona Rule of Civil Appellate Procedure 21. See A.R.S. § 12-342 (providing for recovery of costs on appeal).

For the foregoing reasons, we vacate the orders regarding the Scottsdale residence, the IRS debt, and Desert Equity, and we remand for further proceedings consistent with this decision and for reconsideration and entry of findings regarding Wife’s contempt petition. Wife is awarded her costs on appeal upon compliance with Arizona Rule of Civil Appellate Procedure 21.