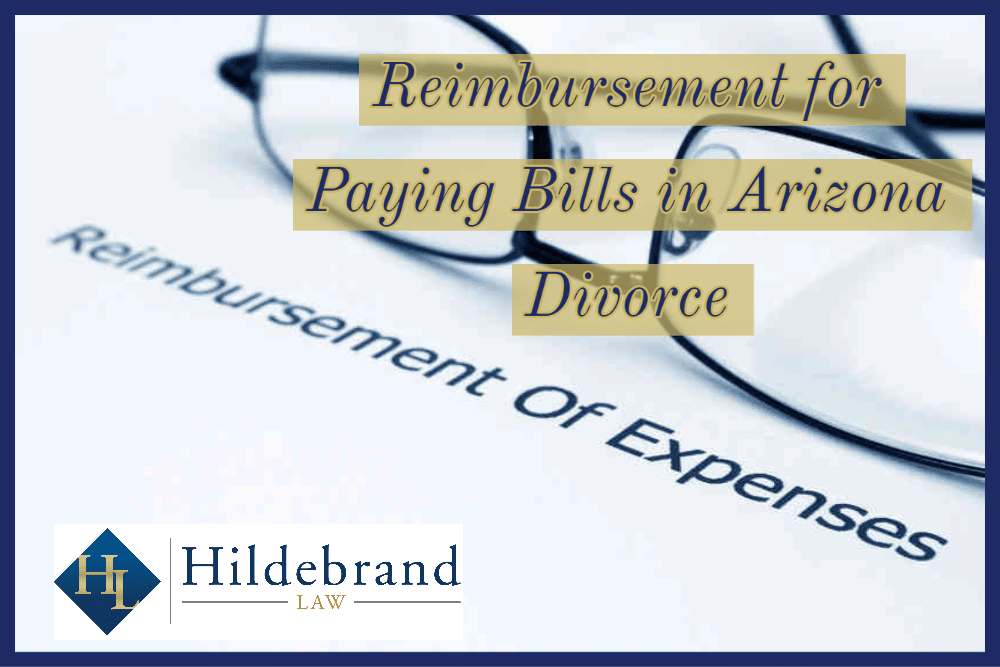 The question sometimes arises whether a spouse may be reimbursed for paying community bills in an Arizona divorce.

The Arizona Court of Appeals addressed that issue in the published decision in the case of Bobrow vs. Bobrow.

During the divorce, the husband paid the car payments on the wife’s car and paid the mortgage on the home. Both the home and wife’s car were found by the trial court to be community property.

The husband then requested the court order that he be reimbursed for the payments he made on the home and the car at the final divorce trial. The trial court denied the husband’s request for reimbursement at trial on the basis that the court considered those payments to be gifts.

The trial court came to the conclusion these payments were gifts because Husband paid them voluntarily without an agreement from the wife he would be reimbursed for those payments.

Arizona Law on Reimbursement for Paying Bills During a Divorce

The law in Arizona provides that a court will treat some transaction between spouses as a gift.

Specifically, when a spouse uses his or her separate property to purchase a home and then places title to that home in both spouses names the use of separate funds has been gifted to the community property home.

The court inherently recognized that the income the husband was earning after the divorce documents were served upon him was his sole and separate property because the “community” terminated when the divorce petition was served on the husband.

However, the question becomes whether this rule changes when a divorce petition is filed and served on the other spouse.

The short answer is yes, the rule changes.

Instead, the intention of the person using his or her separate property to pay community debts controls.

In this case, the husband testified that his intention was not to gift his separate property to the community by making those payments during the divorce.

The burden then shifted to the wife to prove by clear and convincing evidence that the husband did intend to gift those monies to the community; which she failed to do.

No Agreement Required to Receive Reimbursement

The husband did not need the wife’s agreement for him to be reimbursed for paying community debts during the divorce.

The Arizona Court of Appeals went on to add that a spouse should not be penalized when he or she used his sole and separate property to pay community debts during a divorce simply because the other spouse will not agree to reimbursement of those payments.

When a spouse uses his separate property to pay community debts the court must consider those payments when making an equitable division of property.

Some people want to know about the effect of using separate property to pay community debts during a marriage in Arizona.

The Arizona Court of Appeals in an unpublished decision in the case of Stevens v. Stevens provided the answer to that question.

Soon after the marriage, the husband withdrew money from a HELOC (“home equity line of credit”). The parties used the money from that HELOC loan to live on. Sometime later, the husband filed for divorce.

When the divorce case went to trial, the divorce judge concluded the HELOC loan was the husband’s sole and separate debt because he gifted to loan proceeds to the community. The Arizona Court of Appeals disagreed with the divorce court’s decision on that issue.

The Arizona Court of Appeals concluded that the law in Arizona is that all debts incurred during a marriage are presumed to be community debts, citing the prior Arizona Court of Appeals’ decision in the case of In re Marriage of Flowers. Since the money was borrowed on the HELOC during the marriage, that debt is presumed to be community property in Arizona.

Use of Separate Property to Pay Community Debts in Arizona

Likewise, it does not matter that the debt was secured by the husband’s sole and separate property. The Arizona Court of Appeals cited to an earlier decision in the cases of Johnson v. Johnson and Hammett v. Hammett that held the presumption that all debt incurred during marriage is community regardless if that debt is secured by the sole and separate property of one of the spouses so long as the loan proceeds were used to benefit the community.

The Arizona Court of Appeals also rejected the wife’s argument that she did not know husband took the loan out to fund their living expenses. The Court of Appeals indicated a spouse does not have to have personal knowledge about a loan taken out by the other spouse for the debt to be considered community property, so long as the money was used for the benefit of the community.

There is another take-away from this case. Prior to the divorce being finalized, the husband sold his sole and separate home. The balance of the HELOC loan was paid off when the home was sold. The wife argued the payment of the balance of the HELOC loan from the proceeds from the sale of the husband’s sole and separate home constituted a gift to the community.

Call us at (480)305-8300 to schedule your personalized consultation with one of our experienced Phoenix Arizona or Scottsdale Arizona divorce attorneys today.

More Articles About Divorce and Family Law in Arizona