Appealing an Arbitration Award in a Divorce in Arizona | Hildebrand Law

Home » Appealing an Arbitration Award in a Divorce in Arizona | Hildebrand Law, PC

Appealing an Arbitration Award in a Divorce in Arizona | Hildebrand Law, PC 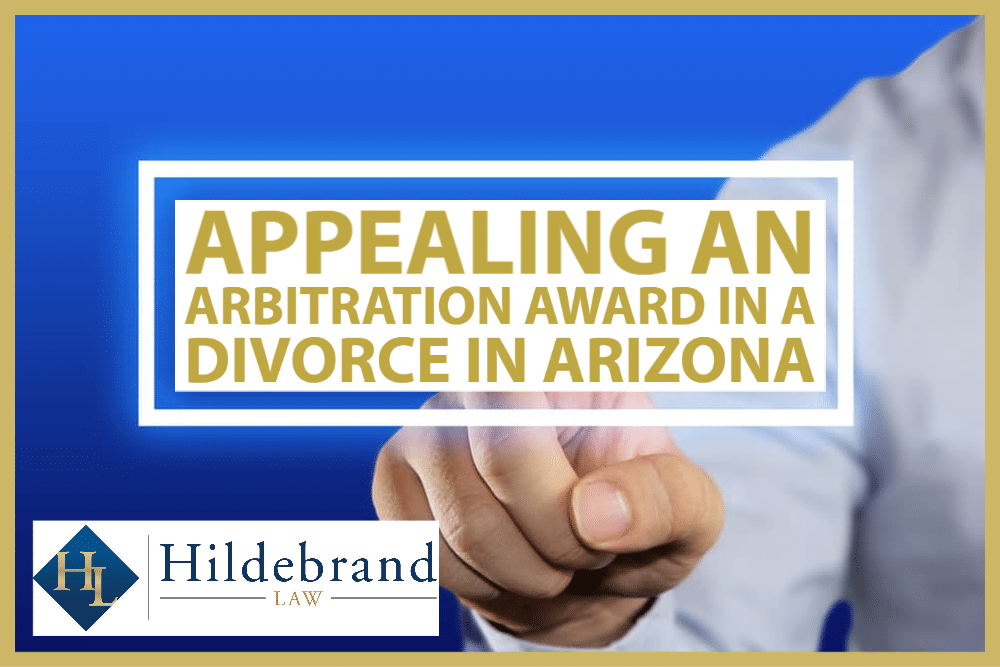 Appealing an Arbitration Award in a Divorce in Arizona

We want to share information with you about appealing an arbitration award in a divorce in Arizona.

Arbitration can be a useful strategy to use in your family law case.

When used appropriately, it can provide a cost-effective and speedy resolution to a dispute.

What happens, however, if one of the parties is disappointed with an arbitrator’s decision?

Siu involved a divorce between a Husband and Wife.

Prior to their marriage, Husband owned various securities that he ultimately deposited into a new brokerage account containing community funds.

One of the disputes was over what portion of the brokerage accounts was community property.

Their stipulation for arbitration authorized the arbitrator to hold hearings and issue binding Arbitration Awards on all issued raised in the parties’ divorce action.

After nine days of hearings, the Arbitrator issued a 34-page ruling.

The ruling found that all the assets of the brokerage accounts were community property and ordered them to be divided equally between the parties.

Husband, in disagreement with the ruling, filed a motion requesting that the Arbitrator amend and correct the characterization of the brokerage accounts.

The Arbitrator denied Husband’s Motion concluding that it involved an inappropriate challenge to the merits of the award.

The Superior Court entered a judgment and decree of dissolution incorporating the Arbitration ruling and Husband appealed.

In its review, the Court of Appeals found that an aggrieved party may move the superior court to vacate an arbitration award under A.R.S. §12-3023 in the following circumstances:

(a) Evident partiality by an arbitrator appointed as a neutral arbitrator.

(b) Corruption by an arbitrator.

(c) Misconduct by an arbitrator prejudicing the rights of a party to the arbitration proceeding.

You Cannot Create a Right to Appeal in an Arbitration Agreement

The Court of Appeals held that the parties, through their stipulation for arbitration, could not by agreement create appellate jurisdiction where it would otherwise not exist.

The Court of Appeals was therefore limited to reviewing whether the Arbitration Award was within the scope of the parties’ agreement.

Finding that the Arbitrator was within the bounds of his authority in issuing the Arbitration Award, the Court of Appeals affirmed the Superior Court and ruled in favor of Mother.

More Articles About Divorce and Family Law in Arizona