Service by Email in an Arizona Divorce | Hildebrand Law, PC

Service by Email in an Arizona Divorce | Hildebrand Law, PC 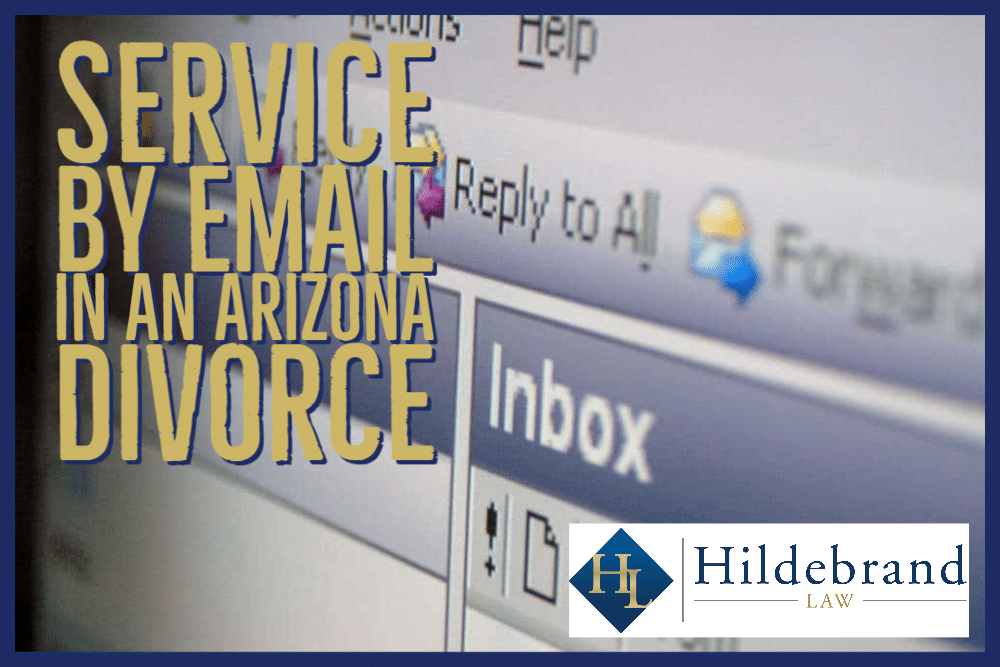 Can an Arizona Divorce Court Allow Service by Email

What happens when you cannot get divorce papers served on your spouse. The short answer is the court can issue an order allowing you to serve your spouse in any way calculated to ensure he or she is aware of the divorce.

As you will see below, a judge has the authority to allow you to serve your spouse by, you guessed it, emailing the documents to your spouse. Read below about the Arizona Court of Appeals’ logic in the memorandum decision in the Greenham v. Hope case.

Ms. Greenham (“Mother”) appeals the superior court’s denial of her motion to vacate part of a child support order. We affirm. Mr. Hope (“Father”) married in 1990 and over the course of their marriage had three children.

Mother subsequently remarried and moved to Mexico with the children and her new husband. In 2011, Father filed the decree in Maricopa County Superior Court and sought custody of the children. Father was awarded sole custody, and in 2012 he petitioned the Arizona court to modify his child support.

The court allowed Father to serve his petition to modify on Mother by emails sent to her email address and the email address of her new husband. The court then set an evidentiary hearing, which it later continued, over Mother’s objection, to November 5, 2012.

Mother moved for leave to appear at the hearing by telephone, acknowledging in her motion that the court would consider the parties’ child support obligations at that hearing. The record does not disclose whether the court ruled on Mother’s motion, but she failed to attend the hearing, without explanation.

We, therefore, instructed the superior court to vacate the child support modification in accordance with Glover v. Glover, 231 Ariz. 1 (App. 2012), and to determine whether the court had subject-matter jurisdiction under the UCCJEA.

On remand, Mother and Father stipulated that the South Carolina child support order was properly registered with the superior court by July 21, 2014, and thus the Arizona court had gained subject-matter jurisdiction over child support.

The court further found that Mother had had notice and an opportunity to be heard on the matter of child support modification, and accordingly adopted the child support arrangements Father had presented in 2012. Mother again appealed; we held that the superior court had subject-matter jurisdiction to enter the child support order pursuant to A.R.S. § 25-1311(A)(2) (2018) and that Mother had waived any objection to personal jurisdiction by appearing in the action. See Hope v. Greenham, 1 CA-CV 15-0548 FC and -1791 FC, 2016 WL 3773544, at 4 (App. Jul. 12, 2016) (“2016 Decision”).

Father filed no answering brief. Although we may deem his failure to constitute a confession of reversible error, in our discretion, we will not do so but will consider the merits of Mother’s appeal. See Bugh v. Bugh, 125 Ariz. 190, 191 (App. 1980).

She further argues she was deprived of due process because she was not given proper notice that the court was going to consider child support modifications at the hearing on November 5, 2012.

Mother’s argument that she was not properly served with the child support petition amounts, at most, to a challenge to personal jurisdiction, not subject-matter jurisdiction. See, e.g., N. Propane Gas Co. v. Kipps, 127 Ariz. 522, 525 (1980) (“The due process clause of the United States Constitution . . . limits the power of a state to achieve personal jurisdiction over a defendant.”) (citing Kulko v. Super. Ct., 436 U.S. 84 (1978)).

Accordingly, and because “the consent decree clearly designates Arizona as the minor children’s home state and the state in which all future actions will be adjudicated,” we held the superior court had subject-matter jurisdiction to modify the child support order. Id. at 4. Finally, Mother contends that when the superior court ruled in June 2015, it failed to take into account the changes in Mother’s circumstances since 2012.

If Mother believes that she has had a substantial and continuing change in circumstances, she may ask the superior court to modify the order. See A.R.S. §§ 25-327(A) (2018), -503(E) (2018). For the foregoing reasons, we affirm the superior court’s denial of Mother’s motion.