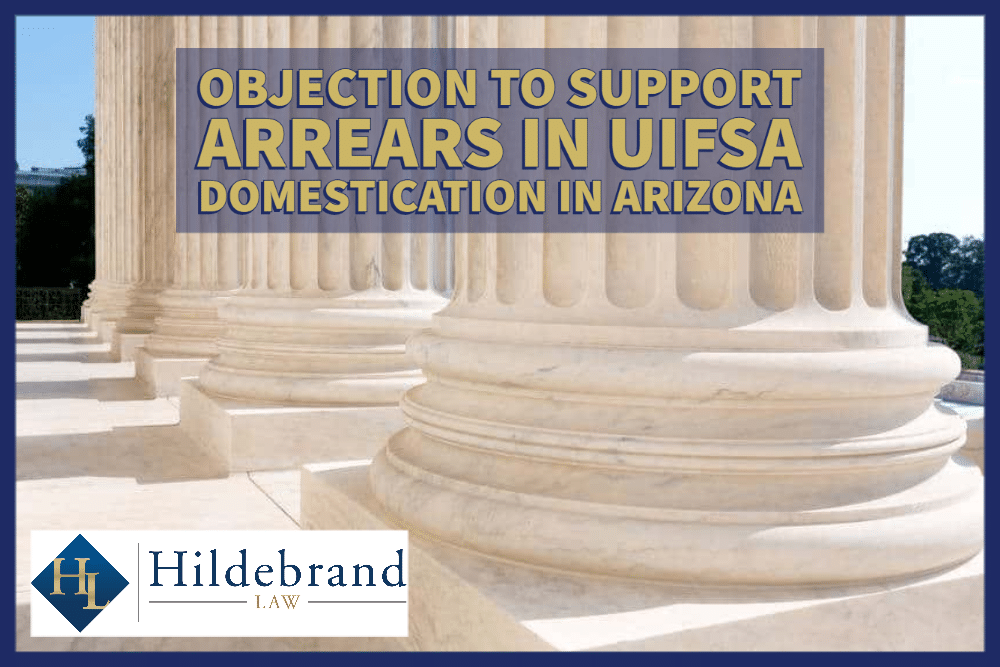 The Arizona Court of Appeals in a memorandum decision in the case of Taylor vs. Pandola had to address the issue of whether a person must object to a child support arrearage calculation included in the domestication of another state’s child support order in Arizona under the Uniform Interstate Family Support Act.

Arizona’s Uniform Interstate Family Support Act (“AUIFSA”) governs the registration of child support orders entered out of state. A.R.S. §§ 25-1301 to -1308. We hold that AUIFSA, by its terms, allows an obligee to contest an obligor’s statement of child support arrears notwithstanding the obligee’s failure to request a hearing within twenty days of receiving notice of the order’s registration.

In August 2014, Father registered a 2004 child support order from Illinois in Arizona. The registration included Father’s sworn statement he was “not aware of any child support arrears owed to Mother in this matter.”

In September, counsel for Mother accepted service of the registration documents, including Father’s statement of arrearages. In October, Father filed a proposed form of judgment stating the amount of arrears was “zero dollars.”

In November, Mother requested a hearing to contest the amount of arrears in Father’s proposed judgment. Because Mother’s request was filed more than twenty days after her attorney accepted service, the family court determined that her request was untimely and that she was precluded from contesting Father’s arrears statement.

As a result, the court confirmed Father’s arrears were “zero through August 14, 2014.” Mother appealed. A split panel of the court of appeals affirmed in part and reversed in part. State ex rel. DES v. Pandola, 240 Ariz. 543, 549 (App. 2016). The court unanimously agreed Mother failed to timely object to Father’s arrears statement. Id. at 546–47

We granted review because Mother raises an issue of statewide importance, specifically, whether under UIFSA a non-registering obligee may contest a registering obligor’s arrears statement if she fails to contest the statement within twenty days of receiving notice of the order’s registration. Statutory interpretation is an issue of law we review de novo. Parrot v. DaimlerChrysler Corp., 212 Ariz. 255, 257  (2006).

UIFSA specifies the procedure for registering a foreign support order in Arizona. See A.R.S. §§ 25-1301 to -1308. A party seeking to contest the validity or enforcement of the foreign order must request a hearing “within twenty days of mailing or personal service of the notice” of the order’s registration. A.R.S. §§ 25-1305(B)(2), -1306.

A party failing to timely request a hearing is precluded from contesting the registered order, and the court may confirm the order, including the amount of “alleged arrearages.” A.R.S. §§ 25-1305(B)(3), -1306(B), -1308. UIFSA does not, however, bar all objections made outside the twenty-day period.

Pursuant to § 25-1306, the “matters” that “could have been asserted” to contest the registered order are listed in § 25-1307. See § 25-1306(A) (stating a non-registering party “may seek to vacate the registration, to assert any defense to an allegation of noncompliance with the registered order, or to contest the remedies being sought or the amount of any alleged arrearages pursuant to section 25-1307”). Thus, preclusion contemplated by UIFSA is limited to the defenses listed in § 25-1307(A)(1)–(8).

With a few exceptions, the defenses contained in § 25-1307 can be raised by either an obligor or an obligee. For example, an obligor and an obligee can assert that the “issuing tribunal lacked personal jurisdiction” or “[t]he order was obtained by fraud.” A.R.S. § 25-1307(A)(1)–(2).

However, some of the defenses apply only to obligors. Specifically, § 1307 lists two defenses that apply to an overstatement of arrears: (1) “full or partial payment has been made,” and (2) the statute of limitations “precludes enforcement of some or all of the alleged arrearages.” A.R.S. § 25-1307(A)(6), (7).

Neither provision permits an obligee to claim an obligor understated the amount of arrears. Cf. State v. Korzep, 165 Ariz. 490, 493 (1990) (according to statutory language its “usual and commonly understood meaning unless the legislature clearly intended a different meaning”).

In de Leon, after a foreign support order was registered with the court, the obligee failed to timely request a hearing to contest an arrears statement. Id. at 147. Construing California’s version of the Uniform Interstate Family Support Act (“UIFSA”) — which, as relevant here, is identical to AUIFSA — the court concluded that the obligee could not have objected to the statement of arrears because it was not one of the seven “narrowly defined defenses to registration” permitted under UIFSA.

The court stated that none of the specified defenses “can fairly be read to encompass an objection that the amount of arrears listed on a registration statement is understated.” Rather, “the only pertinent objection allowed by the statute — that ‘[f]ull or partial payment has been made’ — would only apply to an obligor contending that arrears are overstated.”

As a result, the court held that UIFSA “by its terms does not bar [obligee’s] post-registration challenge to the understatement of arrears because [she] could not have objected on that basis at the time of registration.” Id. Federal law also supports our construction of AUIFSA. If we construed AUIFSA as precluding Mother’s objection, all arrears accruing since 2004, the date of the registered order, would be effectively vacated.

However, federal law mandates that each monthly support payment is an enforceable judgment entitled to full faith and credit by other states; thus, states cannot retroactively vacate or modify foreign support orders. See 28 U.S.C. § 1738B (providing state courts must give full faith and credit to support orders issued by other states); 42 U.S.C. § 666(a)(9) (requiring monthly child support payments be treated as enforceable judgments that cannot be retroactively vacated or modified by other states); see also A.R.S. § 25-503(I) (stating that monthly support payments vest as enforceable arrears judgments); In re Marriage of Yuro, 192 Ariz. 568, 571 (App. 1998) (stating 28 U.S.C. § 1738B, “as a federal statute, preempts all similar state laws pursuant to the Supremacy Clause of the United States Constitution.”).

Father argues that the 2008 comments to UIFSA support his construction of AUIFSA. Specifically, he cites the comment to § 607 of UIFSA, which states that the defense of “full or partial payment” to arrears: While . . . couched in terms that imply the defense to the amount of alleged arrears can only be that they are less, the converse is also available.

We do not consider this comment persuasive. Because AUIFSA’s language is clear and unambiguous, we need not resort to this comment for guidance. State v. Aguilar, 209 Ariz. 40, 48 (2004); see also Jurden, 239 Ariz. at 530 (stating an unambiguous statute is applied as written without resorting to other rules of statutory interpretation).

Finally, Father’s reliance on Tepper v. Hoch, 536 S.E.2d 654, 656–57 (N.C. Ct. App. 2000), is misplaced because it involved a different issue. Specifically, Tepper addressed the ability of an obligor to contest an overstatement of arrears by an obligee outside the twenty-day period. Id. at 658.

For the reasons discussed above, we vacate the opinion of the court of appeals, reverse the family court’s decision, and remand for further proceedings. Additionally, in our discretion, we deny both Mother’s and Father’s requests for attorney fees.

Chris Hildebrand wrote the information on this page about failing to object to a child support arrears declaration in a UIFSA application to ensure everyone has access to information about family law in Arizona. Chris is a divorce and family law attorney at Hildebrand Law, PC. He has over 24 years of Arizona family law experience and has received multiple awards, including US News and World Report “Top Arizona Divorce Attorneys”, Phoenix Magazine “Top Divorce Law Firms”, and Arizona Foothills Magazine “Best of the Valley” award. He believes the policies and procedures he uses to get his clients through a divorce should all be guided by the principles of honesty, integrity, and, quite frankly, actually caring about what his clients are going through in a divorce or family law case. In short, his practice is defined by the success of his clients. He also manages all of the other attorneys at his firm to make sure the outcomes in their clients’ cases are successful as well.