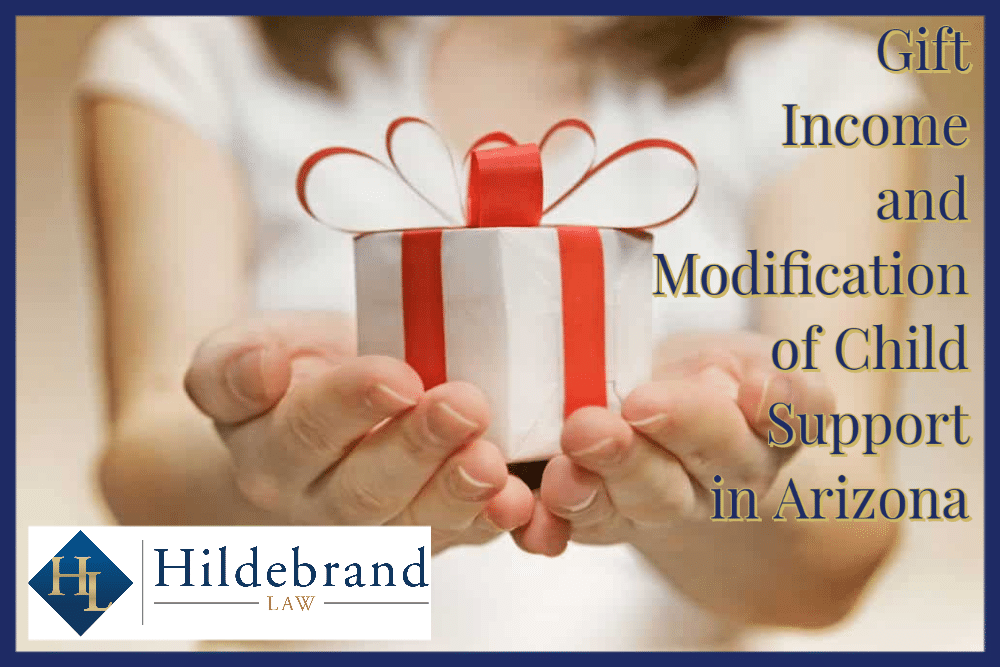 The Arizona Court of Appeals in a memorandum decision in the case of Matthews vs. Robles had to address, among other issues, who has the burden of proving gift income in a modification of child support case in Arizona. The following is the ruling from that Court of Appeals decision.

Father appeals the superior court’s ruling modifying child support, legal decision-making, and parenting time. For reasons that follow, we affirm. Mother and Father have one child together: D.M., born in 2011.

In December 2013, the superior court entered judgment (based in part on the parties’ agreement under Rule 69 of the Arizona Rules of Family Law Procedure) establishing paternity, giving the parties joint legal decision-making, declaring Mother the primary residential parent with Father to have parenting time each weekday and alternating weekends, and imposing on Mother a monthly child support obligation of $39.46.

Just over one year later, the parties agreed to terminate Mother’s ongoing child support obligation based on Father’s increased income, and the court entered an order to that effect.

In August 2016, Father filed a petition to modify legal decision-making, parenting time, and child support. After an evidentiary hearing at which both Father and Mother testified, the court modified their co-parenting arrangement by granting the parties joint legal decisionmaking, establishing equal parenting time, and imposing on Mother a monthly child support obligation of $47.05.

Mother did not file an answering brief. Although we could treat her failure to do so as a confession of error, instead we exercise our discretion to address the merits of Father’s claims. See Savord v. Morton, 235 Ariz. 256, 259 (App. 2014). Father first challenges the superior court’s calculation of his gross income for child support purposes.

The court considered Father’s acknowledged $16.67 hourly wage, and further attributed an additional $1,037 per month in recurring gifts from his family. See Ariz. Rev. Stat. (“A.R.S.”) § 25-320 app. (“Guidelines”) § 5(A). The court noted that Mother did not provide new evidence of recurring gifts, but rather relied on the 2013 child support order that attributed additional income to Father and the absence of any evidence that the payments had changed since that time.

Father asserts that the court erred by considering the additional gift income because Mother did not present evidence to support it and because the 2013 child support order never specifically referenced recurring gift income.

Although the 2013 child support worksheet did not expressly designate a portion of Father’s income as recurring gifts, the record supports an inference that the 2013 calculation was based on $1,037 in gift income in addition to Father’s wages.

Father’s affidavit of financial information at that time listed $1,950.40 in monthly wages. Mother argued that Father should be attributed additional income due to recurring monetary gifts from his family, apparently evidenced by Father’s bank statements.

The court in fact attributed to Father $2,987.92 per month, approximately $1,037 more than Father’s acknowledged monthly wages. Accordingly, the record supports the inference drawn by the superior court that the 2013 child support calculation attributed to Father $1,037 in recurring gift income.

For purposes of the modification, Mother raised the issue of recurring gift income in her pretrial statement, and the court’s ruling reflects that Father failed to provide any controverting evidence or evidence that he no longer received regular monetary gifts from his family.

Father did not provide a transcript of the evidentiary hearing to complete the record on appeal, so we must presume the missing transcript supports the superior court’s findings and ruling in this regard. See Kohler v. Kohler, 211 Ariz. 106, 108 n.1 (App. 2005); see also ARCAP 11(c)(1)(A)–(B) (noting appellant’s duty to provide any transcripts “necessary for proper consideration of the issues on appeal,” particularly to substantiate an argument that the ruling is not supported by the evidence presented).

In light of the reasonable inference that Father received recurring gift income at the time of the 2013 child support calculation, and lacking any evidence that Father no longer received regular monetary gifts, the superior court did not abuse its discretion by attributing to Father an additional $1,037 per month in gift income.

Father next argues that the court erred by crediting Mother for the cost of health insurance covering her as well as the child. The court considered $140 as the cost paid by Mother to provide health, dental, and vision insurance for the child. See Guidelines § 9(A).

Father argues the superior court erred by failing to credit him for the cost of childcare even though he pays the full cost of the child’s daycare. But the inclusion of childcare expenses is not mandatory; instead, the court has discretion whether to add to the basic support obligation childcare costs “that would be appropriate to the parents’ financial abilities.” Guidelines § 9(B)(1).

Here, the parties disputed the appropriate provider of, cost of, and payment for the child’s daycare—all of which would necessarily change in a matter of months when the child started school. And without a transcript of the evidentiary hearing to review the evidence presented as to the actual cost (and reasonableness of the cost) of daycare, we must presume the record supports the superior court’s determination. See Kohler, 211 Ariz. at 108 n.1. D.

Father next argues the superior court erred by changing the years for which each parent could claim tax exemptions for the child, asserting that the parties’ 2013 Rule 69 agreement set the schedule (Mother in even years, Father in odd) and that neither side sought to change it.

But Father’s petition to modify requested the right to claim the child every year, and Mother sought a pro rata division based on relative income (Mother two years, Father every third). See Guidelines § 27 (allowing allocation of tax exemptions by agreement or by the proportionate share of combined adjusted gross income). Although Father’s pretrial statement asserted the 2013 Rule 69 agreement as a stipulation to “alternate years for the tax deduction,” Mother’s pretrial statement reflected no such agreement.

In any event, the court’s resolution retained the previously agreed 50–50 split and simply traded the specific years (Father in even years, Mother in odd). As each parent had received the benefit of the tax exemption under the 2013 judgment twice before the modified support order went into effect, the modification did not give Mother any greater benefit than Father.

Father argues that the superior court erred by ordering that the modified support order take effect the first of the month following entry of the order and that the court should instead have retroactively applied the modified support amount from when Mother stopped paying for childcare or when he filed his petition to modify.

Instead, the proceeding was governed by the modification provisions of A.R.S. § 25-327. Under § 25-327(A), child support modifications generally take effect on the first of the month following notice of the petition to modify, but the court has the discretion to order that the change becomes effective on a later date “for good cause shown.”

The superior court here found good cause to begin payments the month after entry of the modification order to coincide with the beginning of the new equal parenting time plan, which was itself one variable on which the child support calculation was based.

Given our resolution of the other arguments presented, Father has not shown that the court erred in denying his post-trial motion. Father seeks an award of his attorney’s fees and costs on appeal under A.R.S. §§ 12-341 and 25-324. Because Father’s appeal was not successful and having considered the relevant criteria under § 25-324, we deny his request for fees and costs. The superior court’s modification ruling is affirmed.

Chris Hildebrand wrote the information on this page about the burden of proof to prove gifts are actually income to be used in a child support modification in Arizona to ensure everyone has access to information about family law in Arizona. Chris is a divorce and family law attorney at Hildebrand Law, PC. He has over 24 years of Arizona family law experience and has received multiple awards, including US News and World Report “Top Arizona Divorce Attorneys”, Phoenix Magazine “Top Divorce Law Firms”, and Arizona Foothills Magazine “Best of the Valley” award. He believes the policies and procedures he uses to get his clients through a divorce should all be guided by the principles of honesty, integrity, and, quite frankly, actually caring about what his clients are going through in a divorce or family law case. In short, his practice is defined by the success of his clients. He also manages all of the other attorneys at his firm to make sure the outcomes in their clients’ cases are successful as well.