Home » The Relationship Between Child Support and Debts in Arizona

The Relationship Between Child Support and Debts in Arizona

The Relationship Between Child Support and Debts in Arizona

Some people have asked about the relationship between child support and debts in Arizona. Well, the Arizona Court of Appeals answered that question in the case of Jorgenson v. Jorgenson.

Julia and James divorced in 1978 with a legal separation agreement executed by the parties incorporated into the dissolution decree.

Under the terms of the agreement, James was to provide $200 in child support per month for each of their two children, as well as $200 per month in spousal support to Julia, who was then enrolled at the University of Arizona.

The child support payments for the parties’ son were to cease when he would later take up residence with James and the payments for their daughter were to increase to $300 after her twelfth birthday. Spousal support payments were to terminate December 31, 1980, when Julia remarried or graduated from the University, whichever occurred first.

By October of 1980, the parties’ son had moved in with James, Julia had remarried and graduated, and their daughter was nine years old. James filed a petition for modification of the dissolution decree, alleging that a substantial and continuing change of circumstances had occurred, and requested termination of his remaining monetary obligation of a child support obligation for the parties’ daughter.

He presented evidence of three major changes in the relative circumstances of the parties: James had voluntarily incurred a large number of debts, Julia was remarried and her husband’s income was at least equal to James’ income, and Julia, an unemployed university student when the marriage was dissolved, had found employment.

The Impact of Debts on Child Support in Arizona

The appellate court ruled that the first and second of the alleged change in circumstances were not substantial and continuing changes that would justify a reduction or termination of James’ child support obligation.

The justices added that a parent obligated to pay child support may not avoid that obligation by voluntarily incurring debts that reduce their ability to pay must be determined by viewing the support obligation as the primary financial obligation superior to all others.

The justices also stated that the financial ability of Julia’s new husband was irrelevant because he was under no obligation to support the children of the parties. The court, therefore, decided that the evidence revealed only one item that might be considered a substantial and continuing change of circumstances: Julia’s new income.

Julia argues that this change also should not have been considered by the trial court because it was within the contemplation of the parties at the time of their divorce.

She cited several cases to support her argument. The justices concluded that in the cases cited by Julia the evidence showed the parties had not only contemplated that a change would occur, but also possessed facts from which they could make an accurate estimate of how much the financial change would be.

In this case, however, there was evidence from which the trial court could have found that Julia’s new income was contemplated as a possibility by the parties, but they were not capable of making an accurate estimation at the time of their agreement. The justices continued by noting the alternative conditions which would have terminated James’ spousal support obligation.

For instance, there was evidence that even Julia’s graduation from a university was not considered a certainty by the parties.

In addition, the Arizona Court of Appeals stated that, although there was the testimony that he believed her employment prospects to be relatively good if she graduated, the parties could not be certain she would find employment, especially one reaching her current salary after such a short time in her position.

Therefore, the justices ruled the trial court did not abuse its discretion in finding her income was not within the contemplation of the parties at the time of their divorce.

However, the justices believed the increase should be considered when it appears that the noncustodial parent is currently bearing the greater share of the support burden because the custodial parent was unable to share equally in the burden when the obligation was fixed.

The appellate court cited the Arizona appellate case of Jarvis v. Jarvis, in which another division of the appellate court affirmed a trial court’s reduction of the father’s support obligation where the mother had been underemployed at the time of the divorce but had since obtained employment. The Arizona Court of Appeals held that Jarvis was controlling in this case. Julia was underemployed when the parties’ marriage was dissolved and James, therefore, assumed the entire burden of supporting both children.

At the time of the modification of child support hearing, he was still completely supporting one of the children and was providing a major portion of the support needs of the other, even though a substantial and continuing change in Julia’s financial ability made it unnecessary for him to continue bearing a disproportionate amount of the burden.

The trial court had, therefore, modified the decree, so that James was supporting one of the children and Julia was supporting the other. The appellate court ruled that the eminent fairness of this result makes it impossible for them to find an abuse of discretion and affirmed the trial court’s decision.

The Effect of Debt on Child Support 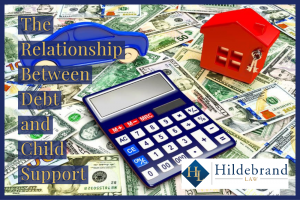 To expand further on that last point, this case can be cited when a parent’s defense in contempt of court action for non-payment of child support or alimony based upon that person’s “other expenses” will fail because the obligation to pay child support is paramount to and comes before payment of other bills.