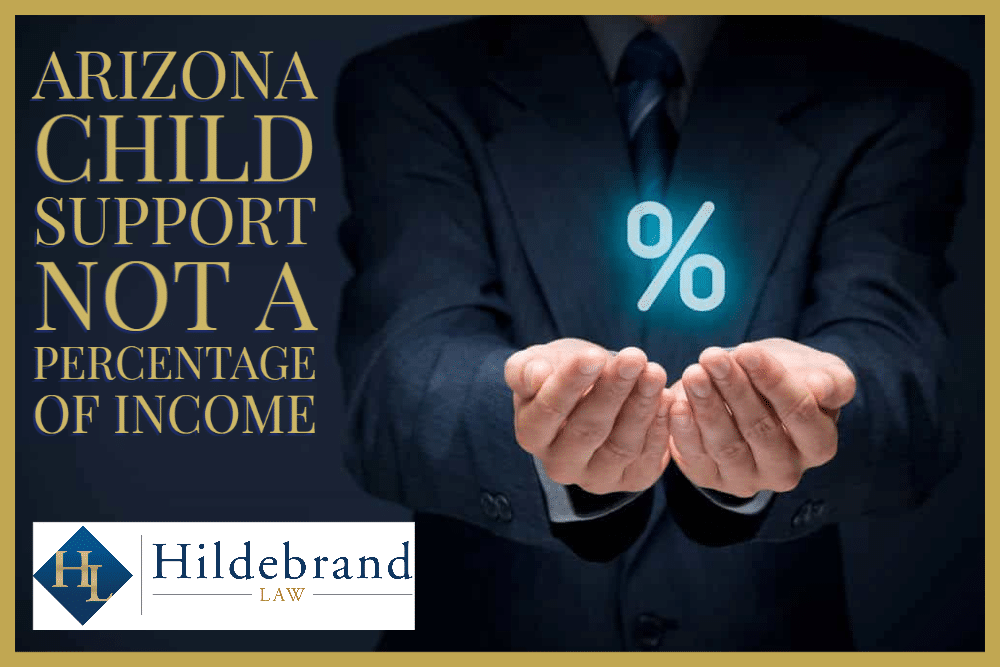 When either a marriage is dissolved in Arizona that involves children conceived from that marriage, or a Paternity Judgment and Order are entered establishing a Father’s rights, the Court will also enter an Order for child support pursuant to the Arizona Child Support Guidelines.

Background of the Case

The parties divorced in 1975. Mother was awarded custody of their two children and Father was obligated to pay Mother $175 per month per child for child support until the children became eighteen years old or otherwise emancipated.

Thereafter, in 1980, Mother petitioned for a modification to increase the amount of the child support award which was granted after a hearing.

Effective September 1980, Father’s child support obligation for the two children was to increase from $350 to $400 per month.

Effective January 1981, the support obligation was to increase to $435 per month.

Effective January 1982, and every January thereafter, the child support for the coming year for the two children was to be set at 30% of Father’s net income from his employment averaged over the preceding twelve months.

Upon the emancipation of the first child, the support obligation would become 20% of Father’s net income.

On Appeal, Father argued that the Trial Court abused its discretion regarding the child support award for three reasons:

(1) there was insufficient evidence upon which to base a finding to justify the modification;

(3) the court was not authorized by law to base future child support on a percentage of Father’s income. The Court of appeals agreed only with Father’s third argument.

As set forth under A.R.S. § 25-327, A.R.S. § 25-503 and the Arizona Child Support Guidelines, a prerequisite to modification of a child support order is a showing of changed circumstances which are substantial and continuing.

Father argued that the court’s determination that sufficiently changed circumstances existed was not supported by the evidence.

On this contention, the Court of Appeals did not agree.

The evidence presented at trial showed that since the 1975 dissolution decree the income of each party had increased.

The increase in Mother’s income was due to the fact she had become employed.

The evidence also showed the current living expenses of the parties and their children.

The increase in the cost of living and its effect as to child support payments was also discussed.

Although there was no direct evidence comparing the cost of supporting the children in 1980 with the numbers in 1975, an inference was drawn from the evidence.

Mother testified that she thought the original child support award was adequate in 1975 but was no longer an appropriate award.

She had been receiving financial assistance from her parents to meet expenses for herself and the children.

She presented an accounting of her expenses showing the separate expenses of the children and those she shares with them.

Father testified that, in 1975, $350 per month was the absolute maximum he was able to pay.

Since his income at the time of modification was substantially greater, that was no longer the case.

In 1975, the children were three and five years old.

At the time of the modification hearing, they were eight and ten.

The current expenses for the children listed by Mother reflected needs not likely to have existed when they were pre-school age.

The Court of Appeals found the Trial Court’s implicit finding of changed circumstances sufficient to justify modifying the child support award as it was supported by the evidence.

Father’s assertion of insufficient evidence was based on the fact that most of Mother’s evidence of her income and expenses came from her testimony.

However, the credibility of witnesses is a matter peculiarly within the province of the trier of facts as the Trial Court is able to view the witnesses and gauge their credibility, and since the Trial Court’s conclusion was reasonably supported by the evidence, the Court of Appeals did not disturb its conclusions on this issue.

Father also argued that the court’s increase of the child support award was arbitrary and capricious because it failed to consider all the factors listed in A.R.S. § 25-320.

The Court is authorized to order either or both parents to pay an amount reasonable and necessary for the support of their child after considering all relevant factors, including the following:

(1) The financial resources and needs of the child;

(2) The financial resources and needs of the custodial parent;

(3) The standard of living the child would have enjoyed had the marriage not been dissolved;

(4) The physical and emotional condition of the child, and their educational needs

(5) The financial resources and needs of the noncustodial parent;

(7) Excessive or abnormal expenditures, destruction, concealment or fraudulent disposition of community, joint tenancy and other property held in common; and

(8) The duration of parenting time and related expenses.

Calculation of Child Support in Arizona

Father’s argument that the Court based its decision solely on his income was not supported by the record.

The Court received evidence pertaining to the factors listed above and concluded that an increase was appropriate and was not based on Father’s increased income only.

The evidence showed that the cost of supporting the children had increased and that although Mother’s income also had increased, she was unable to meet the children’s needs with her income and the support payment.

The court implicitly found that the children’s cost of support had increased and that Father was capable of paying more. Considering all the necessary factors, the evidence supported such a conclusion.

The Court has broad discretion to determine the appropriate amount of child support and the Court of Appeals will not disturb the Trial Court’s decision if there is any reasonable evidence to support it.

The Court of Appeals held that the evidence supported the award of child support of $400 from September through December 1980 and the increase to $435 effective January 1981.

Father’s last argument was a challenge to the Trial Court’s provision for child support beginning January 1982 as not authorized by A.R.S. § 25-320(A).

He pointed to the language of the statute which authorizes the court to order a parent “to pay an amount” for child support.

He contends that setting his child support obligation as a percentage of his income does not qualify as “an amount.”

Here, the Court of Appeals agreed.

Although the court set a specific amount for 1981, the provisions effective January 1982 have the effect of eliminating an award of a specific amount and setting a percentage of Father’s net income as his sole support obligation which is beyond the Trial Court’s authorization.

Taking it to the extreme under the terms of this obligation, if Father has no income he is not liable for any child support regardless of his ability to pay.

Likewise, if his income greatly increases his liability for his children’s support may exceed their reasonable support needs.

Consequently, the percentage of net income award is focused on a single factor, Father’s income, instead of all the factors as required in A.R.S. § 25-320.

Further, a support award must be certain and definite based upon present conditions and not made to depend on uncertain contingencies or hypothetical earnings or income.

The Trial Court record reflected the concern of both parties over the effect that inflationary trends have on the cost of living and supporting their children.

The Court had previously recognized inflation as a matter of common knowledge and as a proper factor to consider in determining the need for increased child support payments.

All that said, the Court of Appeals found that nothing in A.R.S. § 25-320 prevented the Trial Court, in appropriate circumstances, from placing an automatic adjustment on a specific amount to preserve the real value of the award against modification by inflation.

Further, most certainly a parent could petition the Court for the purpose of showing that his or her income had not increased sufficiently to enable that person to meet increases in support obligations caused by the adjustments for the changes due to inflation.

However, an award of a percentage of Father’s income will not necessarily reflect the future effects of inflation.

The Court of Appeals affirmed all other provisions for child support and visitation and remanded the matter back to the Trial Court to enter a judgment consistent with its opinion.

Chris Hildebrand wrote the information on this page about how child support is calculated to ensure everyone has access to information about child support and family law in Arizona. Chris is a child support and family law attorney at Hildebrand Law, PC. He has over 24 years of Arizona child support experience and has received multiple awards, including US News and World Report “Top Arizona Divorce Attorneys”, Phoenix Magazine “Top Divorce Law Firms”, and Arizona Foothills Magazine “Best of the Valley” award. He believes the policies and procedures he uses to get his clients through a divorce should all be guided by the principles of honesty, integrity, and actually caring about what his clients are going through in a divorce or family law case.