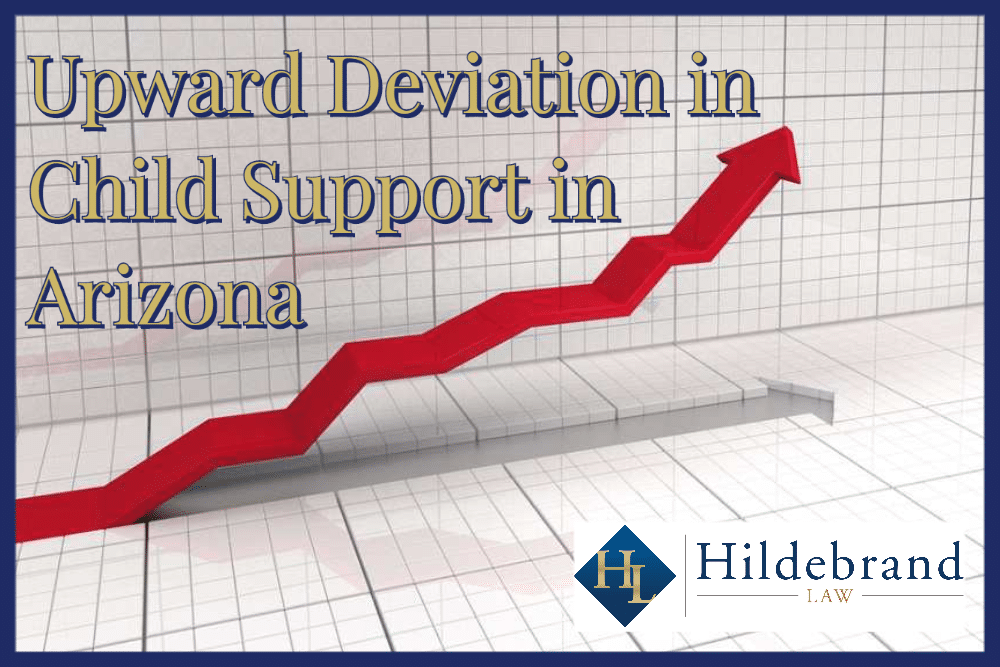 The Arizona Court of Appeals in a memorandum decision in the case of Bowe vs. Vogel had to decide what a superior court must do in order to award a deviation above the amount set forth in the Arizona Child Support Guidelines.

Mother appeals the dissolution decree dissolving her marriage to Father. Mother challenges the superior court’s rulings on child support, property division, and attorney’s fees. For reasons that follow, we affirm.

The parties married in 1995. By the time Mother filed for divorce in January 2014, they had three children—an adult son, a seventeen-year-old son, and a nine-year-old daughter. In 18 years of marriage, the marital community accumulated significant wealth.

Father is a successful land broker with the Arizona based firm Land Advisors Organization (“LAO”), with most of his income derived from commissions and dividends. His income has fluctuated from year to year, varying from $1 million to $7 million per year.

Mother has not worked outside the home since having children and does not have a college degree. The parties reached some pretrial agreements outside of court concerning distributions, property division, and temporary family support payments of $30,000 per month to Mother.

But they were unable to resolve other issues, and the court conducted a three-day trial in April 2016. The court issued an 87-page decree in June 2016 ordering prospective spousal support of $25,000 per month for four years and $20,000 per month for an additional three years.

The court also ordered Father to pay $1,202 in monthly child support, along with other expenses for the children. The court divided the parties’ assets, including life insurance policies and retirement funds, as well as the parties’ multi-million dollar homes in Paradise Valley and Flagstaff.

The court valued Father’s business ownership interest in LAO at $3.5 million, of which Mother received half. Mother timely appealed, and we have jurisdiction under Arizona Revised Statutes (“A.R.S.”) § 12-2101(A)(1).

Mother contends the court erred in its determination of Father’s child support obligation. She asserts that the court (1) should have assigned a higher income to Father for purposes of determining the support obligation, (2) failed to properly consider the children’s pre-dissolution lifestyle, and (3) did not sufficiently show a basis for the final support obligation amount.

Noting that the minor son was almost 18 years old, the court found that the tuition obligation (approximately $20,000 per year) would only apply to the parties’ nine-year-old daughter. Mother asserts that the court should have attributed to Father a higher income given that his average income over the four years before the trial was $200,000 per month.

The Arizona Child Support Guidelines (“Guidelines”), A.R.S. § 25-320 app., broadly define gross income to include commissions, bonuses, and dividends. Guidelines § 5(A). But the court need not attribute income that “is not continuing or recurring in nature” as gross income.

Here, the court’s income determination is supported by the record. LAO’s president testified that, as of the time of trial, Father’s monthly commissions were approximately $60,000. Accepting that testimony, together with evidence that Father had a base salary of $10,000 per month, the court could have attributed to Father an income of $70,000 per month.

Although the court recognized that Father’s monthly income has averaged around $200,000 in recent years, it also noted that Father only earned approximately $92,000 per month in 2015, the year before trial.

The court also considered testimony from Mother’s expert, who testified that Arizona’s real estate market was on an upward growth trend; from a jointly-retained expert, who stated that Father’s industry was “highly cyclical and volatile”; and from LAO’s president, who indicated that commissions and distributions were likely to increase later in the year.

By attributing an income amount ($83,333) that was higher than Father’s then current income, the court implicitly recognized that Father’s income was likely to increase. Accordingly, the court based its income determination on a reasonable interpretation of the facts and did not abuse its discretion.

Relying on Nash, Mother contends that the court failed to conduct a lifestyle analysis for the two minor children. 232 Ariz. at 475, She argues that instead of analyzing the children’s needs, the court incorrectly based its decision on her spending habits, and as a result, did not apply an adequate upward deviation.

The party seeking such an upward deviation has the burden to show that an increase would be in the children’s best interests; relevant factors for these purposes include “the standard of living the children would have enjoyed if the parents and children were living together,” the children’s needs exceeding the base amount, significant disparity of income between the parties, and any other factor relevant to the circumstances of a particular case. Guidelines § 8.

The court “must consider the expense of allowing children who have enjoyed [the] benefits [of significant wealth] to continue to receive them after the dissolution.” Nash, 232 Ariz. at 480, But the court is not required to “provide child support that matches historical spending patterns, dollar-for-dollar.”

Further, the court must always consider the purpose of the Guidelines: “To establish a standard of support for children consistent with the reasonable needs of children and the ability of parents to pay.” Guidelines § 1(A). Mother argues that the facts, in this case, are like those in Nash, in which this court held that the superior court incorrectly interpreted the Guidelines to require granting either the entire requested deviated amount or nothing at all. See 232 Ariz. at 478–79.

Here, however, the court granted an upward deviation, but in an amount, less than Mother had requested. The court found that “Mother has met her burden that application of the [G]uidelines is inappropriate at least as it relates to the additional costs” including the minor children’s tuition, tutoring, and counseling. Thus, the court considered the children’s pre-dissolution lifestyle in ordering an upward deviation of the child support obligation.

Mother asserts the evidence showed that the children need more money to maintain their pre-dissolution lifestyle, which included living in the parties’ 9,000 square foot home near Camelback Mountain, a staff of nannies and housekeepers, and vacations in “mansions . . . , jets, [and] yachts.”

The court found Mother’s justifications unpersuasive, giving two primary reasons for rejecting most of her requests: (1) even considering the children’s past lifestyle, her requests were not consistent with their reasonable needs, and (2) the parties’ income can no longer support such a lifestyle.

The court stated that Mother’s request for over $2,000 per month in transportation expenses when only one minor child drives were “excessive” and “not a reasonable [cost] to assert.” And while discussing how both parents—but Mother in particular—had overspent in recent years, the court noted that Mother spent approximately $160,000 in vacation expenses in 2015 despite the costly pending divorce.

The court further noted that Mother and Father did not agree to any specific luxuries that the children should retain post-dissolution, and ultimately concluded that “[t]here is no evidence that these expenses are necessary, warranted or appropriate to occur in the future.” Compare Nash, 232 Ariz. at 479–80 (noting the parents’ agreement that the children should be able to continue to travel extensively).

Mother argues that the superior court improperly focused on her personal spending. But the superior court correctly considered her spending in the context of the parties’ financial ability to maintain the pre- BOWE v. VOGEL Decision of the Court 6 dissolution lifestyle. See Guidelines § 1(A); Nash, 232 Ariz. at 480. 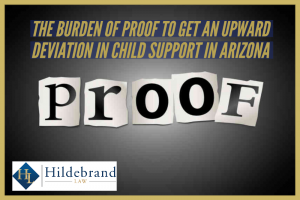 Before the divorce, the parties acknowledged that they needed to reduce their spending and that even without separating, they likely would not have been able to sustain the same lifestyle they had in the past.

The court thus reasonably concluded that “[t]he evidence reflects that it is not economically appropriate or feasible for the children to be supported in the manner Mother claims they should be supported.” Accordingly, the court did not err in its analysis, and its award of child support was not an abuse of discretion.

Mother further contends that the court erred because it did not adequately detail how it reached Father’s total obligation amount. The superior court must make findings justifying an upward deviation and show what the support obligation would be both with and without the deviation. Guidelines § 20(A)(1)–(5).

The court’s findings must be detailed enough for an appellate court to discern how the court arrived at the upward deviation. Stein v. Stein, 238 Ariz. 548, 551 (App. 2015). The findings, in this case, were sufficient.

First, the court filled out the child support worksheet using Mother’s and Father’s gross monthly income to find the basic support obligation under the Guidelines. The court made the proper adjustments for spousal support, the age of the children, parenting time, and medical insurance. Showing its reasoning and calculations, the court found that Father owed a $1,202 monthly child support obligation under the Guidelines.

The court then found that application of the Guidelines would be unjust because of the income disparity between the parties and, considering the best interests of the children, ordered Father to pay additional costs including tuition, tutoring, and counseling. See Guidelines § 20(A)(1)–(2). The court, as required, made written findings as to these criteria. See Guidelines § 20(A)(3).

The court detailed what the support obligation would have been without the deviation and listed exactly what costs were included in the upward deviation. See Guidelines § 20(A)(4)–(5). Although the court did not specify the exact amount of the minor daughter’s tuition in the child support section of the decree, the court stated elsewhere in the decree, and also in a post-decree ruling, that tuition would be approximately $20,000 per year.

The court also specified approximate costs for healthcare, uniforms for the children, tutoring for the minor son, and counseling costs. Although the court did not make specific mathematical calculations for each facet of the upward deviation, such specificity is not required.

Chris Hildebrand wrote the information on this page about an upward deviation in child support to meet the children’s lifestyle to ensure everyone has access to information about family law in Arizona. Chris is a divorce and family law attorney at Hildebrand Law, PC. He has over 24 years of Arizona family law experience and has received multiple awards, including US News and World Report “Top Arizona Divorce Attorneys”, Phoenix Magazine “Top Divorce Law Firms”, and Arizona Foothills Magazine “Best of the Valley” award. He believes the policies and procedures he uses to get his clients through a divorce should all be guided by the principles of honesty, integrity, and, quite frankly, actually caring about what his clients are going through in a divorce or family law case. In short, his practice is defined by the success of his clients. He also manages all of the other attorneys at his firm to make sure the outcomes in their clients’ cases are successful as well.