When Findings of Fact Are Not Required in AZ | Hildebrand Law, PC

When Findings of Fact Are Not Required in AZ | Hildebrand Law, PC 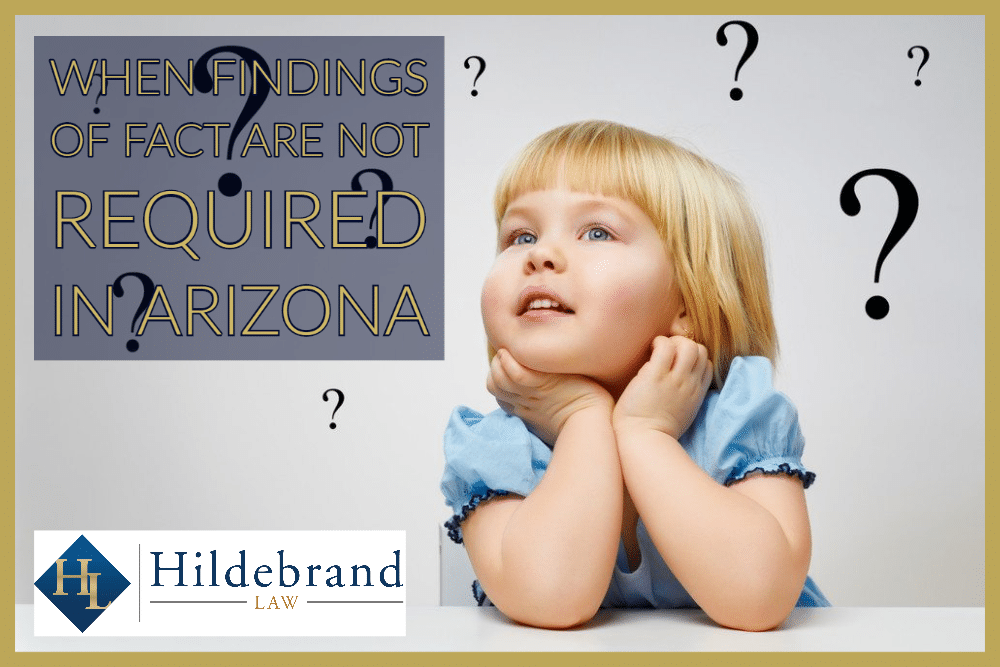 In Arizona, a judge is almost always required to make certain findings of fact of the relevant child custody factors after a child custody trial.

However, if the judge, after trial, concludes after a trial that a parent has failed to show any substantial and continuing changes have occurred since the last child custody order was entered, the judge does not have to make those statutorily required findings of fact after a child custody trial has occurred.

The Arizona Court of Appeals in a memorandum decision in the case of Ervin vs. Mills had to address whether an Arizona court is required to make findings of fact after a child custody hearing when the judge concluded there was no substantial and continuing change in circumstances since the last child custody order was issued. The following is that Court of Appeals ruling.

The parties married in October 2009 and divorced in November 2010. After divorcing, they briefly reconciled, and Mother gave birth to the child in September 2012. In June 2013, Mother petitioned for a paternity order and child support.

Father admitted paternity, agreed to pay child support and sought joint legal decision-making authority. In November 2013, the family court approved the parties’ agreement that Mother would have sole legal decision-making authority and be the primary residential parent, and Father would have parenting time two weekends per month with seventy-two hours’ notice to Mother.

During visits, Father would stay at Mother’s home and be allowed to take the child on outings, provided he and the child returned by 7:00 p.m.

The parties’ relationship deteriorated, however, and Mother began denying Father access to her residence and the child. In December 2015, Father petitioned for modification of parenting time, alleging that Mother “has a control issue.” In response, Mother filed a petition to modify parenting time and child support, seeking only supervised parenting time for Father.

Mother also obtained an order of protection against Father, although the judicial officer who issued the order of protection denied Mother’s request to add the child as a protected person. Alleging Father had threatened and harassed her, engaged in domestic violence against her and the child, and had substance abuse issues, Mother moved for temporary orders denying Father any parenting time before trial. In June, the parties entered a temporary agreement to allow Father supervised parenting time pending trial.

The court noted “conflict between the parties,” but concluded, “the evidence does not establish a safety issue for the child while in Father’s care.” The court made best interest findings, including finding that Father is randomly drug tested by his employer and his tests have been clean, and finding Mother’s claims of domestic violence not credible, and granted Father parenting time of at least six days each month with FaceTime communication at least once per week.

The court also found Mother acted unreasonably in failing to comply with its earlier orders regarding Father’s contacts with the child and awarded Father attorneys’ fees. Less than a month later, Mother moved for emergency temporary orders and petitioned to modify parenting time and child support, alleging that Father had burned the child with a lighter during his parenting time.

The court found the child’s health was not seriously endangered while he was in Father’s care and found “no credible evidence that Father burned the child intentionally or accidentally during the . . . visit.” The court also found Mother’s testimony that the child did not want to see Father and that Father neglected the child by ignoring his food allergies to be not credible.

The court determined Mother’s positions were “grossly unreasonable” and awarded Father his attorneys’ fees incurred in addressing Mother’s petition to modify. The court also expressed “significant concerns” regarding Mother’s mental stability and ordered her to undergo a mental health evaluation. Mother timely appealed. We have jurisdiction pursuant to A.R.S. § 12-2101(A)(1) (2016).

Mother next contends the family court did not give proper weight to her testimony regarding the burn incident. We will not disturb the court’s parenting time order absent an abuse of discretion. Nold v. Nold, 232 Ariz. 270, 273 (App. 2013); see also Pridgeon, 134 Ariz. at 179 (“The trial court has broad discretion to determine whether a change of circumstances has occurred.” (citation omitted)).

The family court found Mother’s testimony not credible, and the record supports this finding. Mother testified she did not initially notice the burn mark on the child’s arm until he was home, awoke from a nap, and told her about the injury because the child was wearing a long-sleeved shirt.

But a photograph of the shirt the child was wearing at the time shows the shirt had short sleeves. The police report also indicated Mother noticed the burn right away and asked the child, “[D]id daddy hurt you?” Mother also admitted she told the police, the emergency room physician, and the counselor the child saw after the incident that Father had a history of domestic abuse, which is not substantiated in the record before us.

Additionally, Father testified the child was not fearful of him and never mentioned the burn except when talking via FaceTime from Mother’s home. Father also testified that Mother refused to bring the child to multiple supervised visits. We defer to the family court’s credibility determinations. See Gutierrez v. Gutierrez, 193 Ariz. 343, 347 (App. 1998); see also Hurd v. Hurd, 223 Ariz. 48, 52 (App. 2009) (“Our duty on review does not include re-weighing conflicting evidence or redetermining the preponderance of the evidence.” (citation omitted)).

Mother also attempts to equate this case with Christopher K. v. Markaa S., 233 Ariz. 297 (App. 2013). In Christopher K., we held “that when the physical discipline of a child is at issue in a custody proceeding, the court must determine expressly whether the discipline rises to the level of domestic violence” and, if it does, the court must give that evidence “primary importance.” Id. at 298. Here, however, the court found no credible evidence of any “imminent risk of harm to the child while in Father’s care,” and the record supports that finding.

Mother also challenges the court’s order requiring her to undergo a mental health evaluation, contending Father did not request such an evaluation in his pretrial statement. The family court ordered Mother to undergo a psychological evaluation based on the court’s “significant concerns regarding Mother’s mental stability” and belief “that the child may be at risk for physical and psychological harm by Mother.”

We review the family court’s ruling for an abuse of discretion and resulting prejudice. See Kosidlo v. Kosidlo, 125 Ariz. 32, 35 (App. 1979) (holding the court’s wrongful failure to exclude witnesses did not require reversal unless prejudice was demonstrated), disapproved in part on other grounds, 125 Ariz. 18, 18 (1979).

In general, pretrial statements govern the subsequent course of the litigation. Leathers v. Leathers, 216 Ariz. 374, 378 (App. 2007) (citation omitted). Arizona Rule of Family Law Procedure (“Rule”) 76(C), however, does not expressly limit the court to considering only the relief set forth therein. Accordingly, Mother’s argument on this basis does not afford her relief.

Mother challenges the family court’s fee award, which we review for an abuse of discretion. Magee v. Magee, 206 Ariz. 589, 590 (App. 2004). Mother first contends “Father did not plead a statutory or rule basis for his request for fees.”

Rule 78(D)(1) only requires that parties state their fee claims “in the pleadings, pretrial statement, or by motion filed prior to trial or post-decree evidentiary hearing.” Although neither party cited any specific statutory authority, both parties identified attorneys’ fees as an issue to be addressed in their pretrial statements—Mother by noting that an award of fees and costs would be appropriate if the court found a party had taken an unreasonable position, and Father by asserting that an award of attorneys’ fees and costs to him was appropriate because Mother’s claim was fabricated and brought in bad faith. We thus reject Mother’s contention.

Mother also contends Father did not comply with Rule 91, which requires parties to file an affidavit of financial information when asserting an attorneys’ fees claim. See Ariz. R. Fam. Law P. 91(S). Mother did not raise this objection below and has waived it on appeal. See Hannosh v. Segal, 235 Ariz. 108, 115 (App. 2014).

In any event, the court had substantial information before it—including the parties’ previously filed affidavits of financial information and testimony taken during the hearing—to consider the parties’ financial resources. Moreover, the court based its award on the unreasonableness of Mother’s positions, not any financial disparity. See Magee, 206 Ariz. at 591 n.1. (“[A]n applicant need not show both a financial disparity and an unreasonable opponent in order to qualify for consideration for an award.”). We, therefore, find no abuse of discretion.

Father requests his attorneys’ fees incurred on appeal pursuant to A.R.S. § 25-324(A) and (B) (2017). Subsection (A) authorizes an award of attorneys’ fees and costs upon considering “the financial resources of both parties and the reasonableness of the positions each party has taken throughout the proceedings.”

The record does not suggest that a significant financial disparity exists between the parties, but we agree with the family court that Mother took unreasonable positions below. Mother has continued to assert those same positions in this appeal.

We, therefore, award Father reasonable attorneys’ fees pursuant to § 25-324(A) upon compliance with Arizona Rule of Civil Appellate Procedure 21. Father also may recover his taxable costs as the successful party on appeal. We decline to award attorneys’ fees or costs under § 25-324(B). We affirm the family court’s orders.