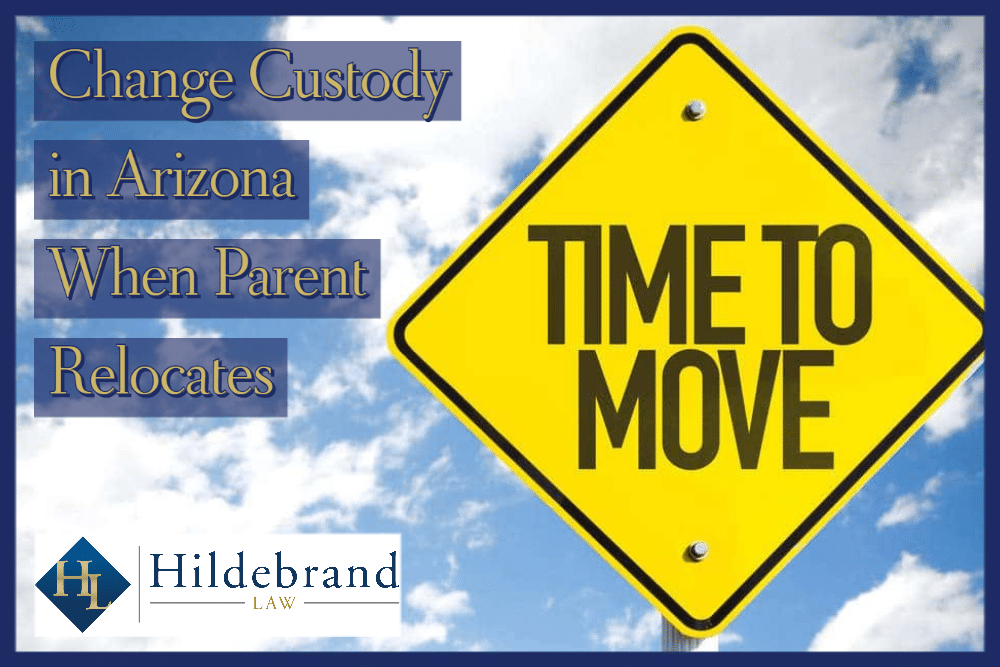 Change Child Custody in Arizona When Parent Relocates to Another State

The Arizona Court of Appeals in a memorandum decision in the case of In re the marriage of Kasper and Ausema had to address a trial court’s decision to deny a mother a relocation of a child while changing primary physical custody of the children to their father based upon Mother’s relocation.

Mother appeals from the trial court’s ruling denying her petition to relocate the residence of the parties’ children from California to Nevada, denying her request to modify legal decision-making authority and parenting time, denying her request for attorney fees, granting Father’s request to be primary residential parent, removing Kasper’s final legal decision-making authority, and granting Ausema a greater share of parenting time.

In January 2016, Mother petitioned under A.R.S. § 25-408 to relocate with the children from Arizona to California. Father opposed the petition and filed his own motion to modify legal decision-making, parenting time, and child support. Following an evidentiary hearing in February 2016, the court granted Mother’s petition, allowing her to relocate with the children to California.

Following a December 30, 2016, evidentiary hearing, the trial court denied Mother’s petition on March 27, 2017, finding that she had not carried her burden of proving that it was in the children’s best interest to move to Nevada.

Mother timely appeals and seeks a reversal to allow her to relocate the children to Nevada and seeks an award of attorney fees. We have jurisdiction under A.R.S. § 12-2101(A)(1). Application of A.R.S. § 25-408.

For the first time on appeal, Mother argues that the trial court erred by assigning her the burden of proving that the relocation was in the children’s best interest under A.R.S. § 25-408. She argues that § 25-408, Arizona’s relocation statute, does not apply because she was residing in California at the time she sought to relocate to Nevada.

Thus, she argues, the statute’s placement of the burden of proof on her as the relocating parent was a legal error. At no time in the trial court did Mother raise this argument; indeed, her petition to relocate was brought under § 25-408, and she argued below that the § 25-408 factors favored the relocation.

Legal issues and arguments must be presented to the trial court and cannot be argued for the first time on appeal. See Chang v. Siu, 234 Ariz. 442, (App. 2014) (“An appellate court normally will not address arguments not raised in the superior court prior to the appeal.”). Because this argument and legal issue were not presented to the trial court, we will not consider it.

Kasper argues that the best-interest factors supported her relocation and that the trial court abused its discretion in finding otherwise. We review a relocation decision for an abuse of discretion. Hurd v. Hurd, 223 Ariz. 48, (App. 2009). “An abuse of discretion exists when the record, viewed in the light most favorable to upholding the trial court’s decision, is devoid of competent evidence to support the decision.” Id. quoting State ex rel. Dep’t of Econ. Sec. v. Burton, 205 Ariz. 27 (App. 2003).

Trial courts are given broad discretion to determine what is in a child’s best interest because they are in the best position to make that determination. Porter v. Porter, 21 Ariz. App. 300, 302 (1974). We defer to a trial court’s discretionary findings, assessment of witness credibility, and the weighing of evidence so long as the trial court “remains within the bounds of that discretion.” Gutierrez v. Fox, 242 Ariz. 259, (App. 2017).

Mother argues the trial court’s conclusions were “against the weight of the evidence.” However, she is essentially asking this court to reweigh the evidence and disregard any assessment by the trial court of the witnesses’ credibility, which we will not do. Gutierrez v. Gutierrez, 193 Ariz. 343 (App. 1998).

Substantial evidence supports the trial court’s findings and conclusions that relocation was not in the children’s best interest, and, because it does, we find no abuse of discretion.

Mother claims that the order removing her final legal decision-making authority was an error because neither party expressly moved for such a modification under Rule 91, Ariz. R. Fam. Law P., and because there was no express finding of a material change in circumstances or a showing that modification was in the children’s best interest.

We review a trial court’s legal decision-making order for an abuse of discretion. Nold v. Nold, 232 Ariz. 270, (App. 2013). For such a modification, “the court must first determine whether there has been a change in circumstances materially affecting the child’s welfare,” and then, “whether a change in custody would be in the child’s best interests.” Christopher K. v. Markaa S., 233 Ariz. 297, (App. 2013) (internal citations omitted).

Whether or not a Rule 91 petition is filed with the relocation petition, it is self-evident that a petition by a parent seeking to move the residence of the children from one state to another may require a change in either parenting time or legal decision-making authority. Cf. Murray v. Murray, 239 Ariz. 174, (App. 2016) (finding a material change in circumstances because the mother’s plan to relocate may have implicated legal decision-making).

The court left unchanged the overall joint legal decision-making order, and the court’s best-interest findings support the previous relocation to California was supposed to be permanent, but within several months she sought to relocate the children again. In fact, she purchased a home and enrolled the children in school in Nevada without seeking the father’s consent or leave of the court.

Unlike the move to California, the move to Nevada would be a lateral move for Mother, in that she had failed to demonstrate how the move would benefit the children financially or socially. Father, on the other hand, has remained in the same home for three years, in the state the children were raised.

Mother also argues that the trial court abused its discretion in setting the parenting schedule which gave her less parenting time. A court’s award of parenting time will not be disturbed absent a clear abuse of discretion. Pridgeon, 134 Ariz. at 179. A reviewing court will not reweigh the evidence. See Gutierrez, 242 Ariz. 259.

A trial court abuses its discretion in awarding parenting time when its decision is not supported by the evidence. See Pridgeon, 134 Ariz. at 179. “Shared legal decision making does not necessarily mean equal parenting time.” A.R.S. § 25- 403.02(E).

The trial court’s parenting time order is supported by the court’s finding that relocation was not in the children’s best interest, and because the school-aged children would primarily reside with Father, with Mother living in another state, Mother’s parenting time would, if not necessarily, at least justifiably, be reduced. Thus, this court cannot say that the trial court abused its discretion.

Finally, Mother makes a series of other arguments that the trial court erred and abused its discretion when it (1) failed to award her attorney fees, (2) failed to consider its February 19, 2016, order as controlling, (3) referred to the Nevada move as her second proposed move “in the last few months,” and (4) “bolster[ed]” its order with unstated findings from its earlier, temporary order.

As to attorney fees, Kasper cites to no legal authority that supports her allegation that the trial court abused its discretion, we, therefore, consider the argument waived. See Cullum v. Cullum, 215 Ariz. 352, n.5 (App. 2007) (“We will not consider arguments posited without authority.”).

For the foregoing reasons, we affirm the judgment of the trial court. Both sides have requested an award of attorney fees and costs on appeal under Rule 21, Ariz. R. Civ. App. P., and A.R.S. § 25-324. In our discretion, we deny Mother’s request because she has not prevailed on appeal and Father’s request because Mother’s appeal was not frivolous or unreasonable.

Murray v. Murray Holding That a Relocation Constitutes a Request to Modify Child Custody in Arizona

In Murray v. Murray, the Arizona Court of Appeals considered the application of this requirement to a parent’s request to relocate with the children when that relocation would affect parenting time or legal decision making for the parents.

Pursuant to the modification, Mother and Father continued to share joint legal decision making, but Father’s parenting time was increased to six days every two weeks. A month later, in the month of February 2014, Father learned Mother intended to remarry and relocate with the children to the state of Nebraska. He filed a Motion to Prevent Relocation and Request for Attorney’s Fees and Costs.

The court granted Father’s motion in August 2014 ruling that Mother could not take the children to Nebraska. The mother then filed a Motion for Clarification and/or Motion to Amend Under Advisement Ruling, followed by an Expedited Motion to Allow Petitioner’s Witnesses to Appear Telephonically for Trial and a Motion to Enforce the Parties’ Agreement. Mother’s motions were denied and Father was awarded a portion of his attorney’s fees and costs. Mother appealed the judge’s rulings.

Child Relocation in Arizona and the One Year Rule

On appeal, Mother argued the superior court judge erred in his ruling that A.R.S. Section 25-411(A) prevented the relocation of the children less than a year after the modification order issued January 2014. Additional findings of the court were that even were the one-year restriction not to apply to the case, Mother did not prove to the court that the relocation of the children would be in their best interests.

The Arizona Court of Appeals reviewed the case to determine if the judge abused his discretion. After review, it found the superior court judge’s application of A.R.S. Section 25-411(A) to the case to prevent Mother’s relocation with the children was correct due to the fact that the one year waiting period to modify the prior legal decision making and parenting time order had not expired.

The move would have required that changes be made to the parenting time arrangements already established by the January 2014 order. It was also concluded that the move may have also required a change in legal decision making. Mother’s plan to move with the children to Nebraska, with Father continuing to reside in Arizona, would disrupt Father’s parenting time and impact his ability to participate in shared legal decision making over the children.