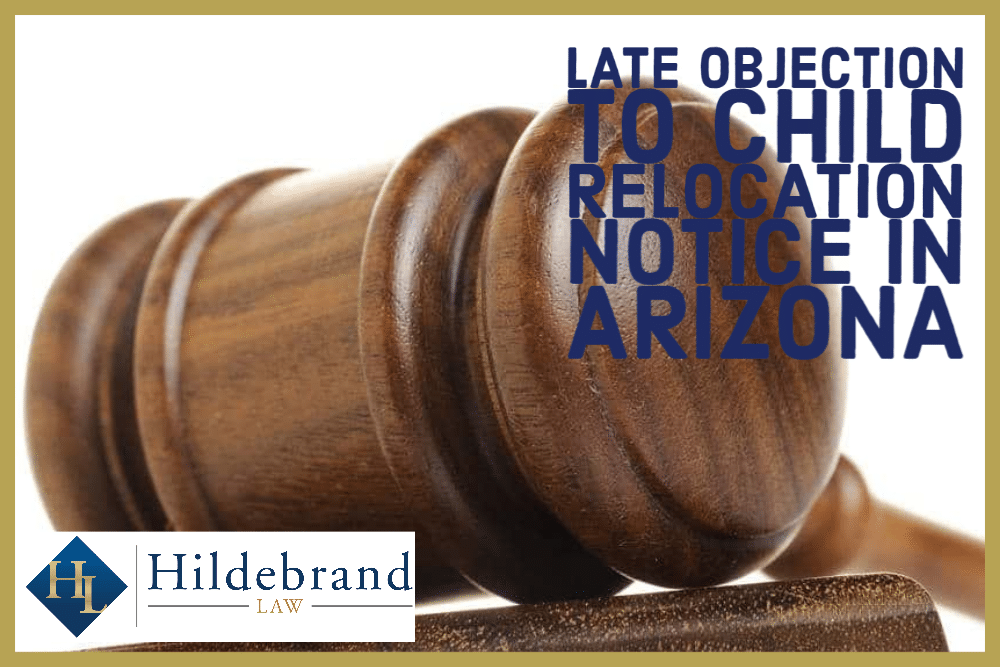 The Arizona Court of Appeals in a memorandum decision in the case of Jurgens vs. Jurgens addressed whether an Arizona trial court may set a hearing to allow a parent to object to the other parent’s relocation of a child when he filed a late objection to child relocation in Arizona.

The following is the court’s decision on that issue.

The case was a Yuma domestic relations relocation matter.

Ms. Jurgens (mother) appeals from the family court’s ruling denying her request to relocate her child to the Phoenix metro area.

Finding no abuse of discretion, we affirm. Mother and Mr. Jurgens (father) were married in 2006 and had one minor child together in 2013.

Although not originally from Yuma, at the time of the relocation hearing parents had each been employed as teachers in Yuma for more than a dozen years.

Father additionally regularly coached high school basketball and golf, which impacted his schedule during those seasons.

During the marriage, the mother obtained her master’s degree in the hope that she could one day secure an administrative position or an assistant principal job.

Parents were divorced by consent decree in 2015 and the two amicably shared joint legal custody of their daughter until February 2017.

At that time, mother declined to sign her renewal offer of employment from the Yuma School District and instead accepted an assistant principal position in a charter public school in the metro Phoenix area.

She advised father by email a couple of days later of her planned relocation with their three-year-old daughter.

Fifteen days later, father filed a “Petition to Prevent Relocation;” father advised mother via email that he had filed for primary custody in the event she decided to go forward with the move.

He did not have her formally served, however mother admits receiving that email.

Consideration of a Late Objection to Child Relocation

The court, having reviewed the father’s petition, set a hearing which was later rescheduled to May 17, 2017.

Prior to the hearing, on April 14, 2017, the mother was formally served with the father’s Petition to Prevent Relocation. Mother filed a motion to dismiss the father’s petition asserting that it was untimely in two different ways.

First, mother argued that father filed his petition prematurely as it occurred prior to her serving him with the statutorily required Notice of Intent.

The family court denied mother’s motion to dismiss and subsequently denied her motion to reconsider that ruling.

It found good cause existed to allow father a hearing on his petition and that it was responsive to mother’s notice of intent to relocate, although filed four days before mother officially served him with the letter. It also found no prejudice to mother.

An evidentiary hearing was held. At the outset mother objected, arguing:

(1) unless the father could show good cause for filing late, a hearing on the proposed relocation or best interests was unnecessary, and

(2) that father had the burden of proof. Mother argued, “the best interests factor is removed if somebody does not object in a timely manner.”

The family court disagreed and advised the mother, as the relocating parent, she had the burden of proof and that it would consider what was in the child’s best interests.

The best interests of the child, the court said, was the single most important factor.

Mother, father, and two witnesses familiar with the family testified. Mother and father were both, admittedly, excellent and reasonable parents who were bonded to the child.

Parents had cooperated during the joint custody to work around scheduling conflicts, especially as they pertained to father’s high school coaching schedules.

The child has no mental or physical disability requiring special accommodations.

Evidence was also introduced that the child was bonded to the mother’s significant other.

At the hearing, significant time was spent on testimony regarding the time father spent coaching and what the effect of coaching would mean as far as having the child in childcare.

Conversely, the child had no contacts in the Phoenix area, but mother argued that her new job provided a higher salary, more career opportunity, and had hours more conducive to parenting the child—all of which were benefits to the child.

Evidence was introduced that the child attended a Yuma preschool which she enjoyed, was bonded to local people including her babysitter (who thought of her as a grandchild) and to her father’s significant other.

Father affirmed to the court were he to get custody that he would forego his coaching jobs and advised the court he had already spoken to the high school’s athletic director about that possibility.

The court found in the father’s favor and modified child support and the parenting time schedule to reflect the change.

Ruling on Father’s Late Objection in an Arizona Relocation Case

Pursuant to A.R.S. § 25–408(A) and (B), a parent who wants to move a child out of state or more than 100 miles within the state, must give the other parent 45 days’ written notice, generally by certified mail.

The family court here found that father had substantially complied with the procedural requirements of A.R.S. § 25-408(C) and had good cause for the late service.

The court highlighted that not only had father filed an immediate early petition with the court to prevent the relocation, but the mother also had actual, nearly concurrent, notice of that filing.

Further, the court found no prejudice to the mother as to the late service as she had sufficient time to find counsel and to prepare for the hearing. 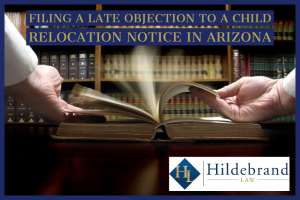 In Owen, another relocation case which disallowed relocation of the minor child, mother complained of procedural irregularities including that she was untimely served. Id. at 422.

As in this case, we found that she had suffered no prejudice when the relocation hearing proceeded on its merits. See id.

We review child custody determinations under an abuse of discretion standard. Owen v. Blackhawk, 206 Ariz. at 420.

The burden of proof is on the parent seeking the relocation to show that such a move is in the child’s best interests. A.R.S. § 25-408(G).

In deciding a request for relocation, the court must make findings including addressing whether the move is in the child’s best interests. See Owen, 206 Ariz. at 421,

The court considering a relocation petition must take into account “all relevant factors” relating to the child’s best interests. A.R.S. § 25-408(I).

Therefore, when a question of a child’s best interests presents a disputed issue of fact, the court must allow the parties to present evidence before it makes its finding. See Volk v. Brame, 235 Ariz. 462, 466-67 (App. 2014) (due process requires the court to hear testimony when making a finding that hinges on credibility).

Mother asks us to exalt form over substance.

This we will not do, particularly in a family court matter where a child’s best interests are at stake. Duckstein v. Wolf, 230 Ariz. 227, 232-33 (App. 2012) (the failure to file a verified petition for dissolution did not deprive the family court of jurisdiction).

Viewing the evidence in the light most favorable to sustaining the family court’s findings, we determine the record reasonably supports the denial of the child’s relocation. See Gutierrez v. Gutierrez, 193 Ariz. 343, 346 (App. 1998).

In light of the evidence in the record, the family court did not abuse its discretion in finding the mother didn’t carry her burden of proof to relocate.

For this reason, we find no abuse of discretion and affirm the family court’s ruling.

Father seeks his attorney fees. As mother points out, in his appellate brief father failed to cite the legal basis for his request as required by ARCAP 21(a).

Father and mother make substantially similar incomes and both acted in good faith in litigating the merits of the relocation, therefore we decline to award fees.

The family court is affirmed. Father’s request for attorneys’ fees is denied.

Chris Hildebrand wrote the information on this page about objecting to the relocation of a child in a child custody case to ensure everyone has access to information about child law in Arizona. Chris is a divorce and family law attorney at Hildebrand Law, PC. He has over 24 years of Arizona family law experience and has received multiple awards, including US News and World Report “Top Arizona Divorce Attorneys”, Phoenix Magazine “Top Divorce Law Firms”, and Arizona Foothills Magazine “Best of the Valley” award. He believes the policies and procedures he uses to get his clients through a divorce should all be guided by the principles of honesty, integrity, and actually caring about what his clients are going through in a divorce or family law case.