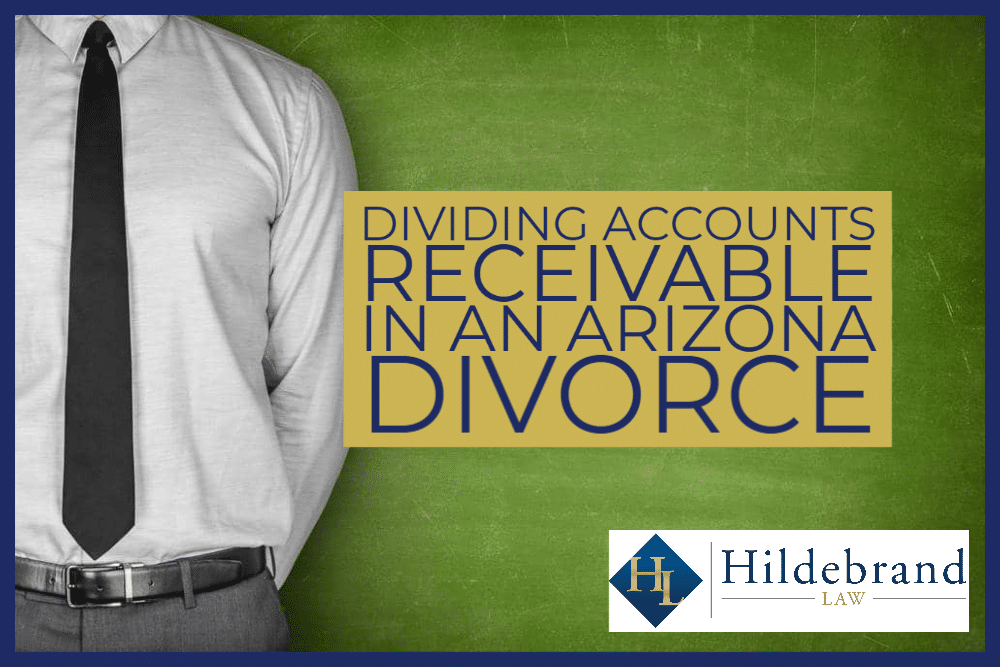 The answer to the question can a business owners accounts receivable be divided in a divorce in Arizona is a big fat “maybe”.

Unfortunately, there is conflicting case law on the subject that was made a little murkier in the case of McClennen vs. McClennen in which the court of appeals held that a lawyer’s accounts receivables should not be divided in the divorce and should, instead, go the lawyer when the court is using the attorney’s income from his accounts receivables as a basis to calculate child support and award alimony.

There are other cases that do not make such a distinction but, instead, simply grants the discretion to the trial court to simply do what is “fair and equitable”.

To learn more, read on about the Arizona Court of Appeals decision in the case of McClennen v. McClennen.

When a marriage is dissolved in Arizona, the court will divide both the community assets and debts equitably between the parties, though not necessarily equally or in kind.

At the time of trial, the McClennen’s had been married for approximately 25 years.

The trial court awarded Mrs. McClennen an absolute divorce and awarded the care, custody, and control of their ten-year-old daughter to her.

The trial court did not dispose of the parties’ interest in their Phoenix Towers property because it was held as a joint tenancy with the right of survivorship.

On appeal from the trial court’s division of assets and debts, Mrs. McClennen contended the trial court erred in how it divided the community property, in failing to grant her motion for a new trial based on newly discovered evidence, and in failing to take into consideration tax consequences in the granting of alimony to her.

The Arizona Court of Appeals agreed with the trial court’s rulings and reasoning based on the equitable distribution of their community property.

Mrs. McClennen asserted the trial court erred in the distribution of the parties’ assets and liabilities, contending a three to one disparity in the net asset value between the assets distributed to Mrs. McClennen and Mr. McClennen.

On appeal, Mrs. McClennen began questioning the value of several items in addition to the capital account and the Stanford Drive property, regarding the valuation of the jewelry, the home furnishings, and the automobiles.

Division of an Attorneys Accounts Receivable in a Divorce in Arizona

However, a question did remain regarding the negative value given the Stanford Drive property of $1,534.00. Mr. McClennen’s capital account was valued at $11,428.00.

Mrs. McClennen argued it is obvious that the capital account figure of $11,428.00 did not take into consideration any accounts receivable.

However, the problem with that was that the only evidence before the trial court was that the capital account was in the sum of $11,428.00 which Mrs. McClennen did not dispute at the time trial, and as such that argument was waived on appeal.

Further, even if the evidence did show an amount of Mrs. McClennen’s share of the accounts receivable at the time of the trial it would have been improper for the trial court to divide them between the spouses as a lawyer’s accounts receivable represents what he lives on from month to month.

It is a lawyer’s source of income and the source of the alimony and child support payments ordered by the trial court to be paid to Mrs. McClennen.

Mr. McClennen’s breakdown of the net value of the property that was awarded to each party was that the trial court awarded $17,500.00 worth of the home furnishings to Mrs. McClennen and $6,500.00 to Mr. McClennen.

At trial, the only testimony was that the total home furnishings were valued in the sum of $24,000.00.

Mrs. McClennen wanted the appellate court to assume that the court divided the home furnishings equally between the parties, which would mean that each party received $12,000.00 worth of household furnishings.

For the sake of argument, the appellate court accepted said contention, and also the contention that the Stanford Drive property should not be included with a negative value and arrived at the conclusion that Mr. McClennen received $44,842.00 net value of assets and Mrs. McClennen $36,250.00.

The total unsecured community obligations of the parties amounted to $52,054.00.

Subtracting those sums from the net value of the assets given to each party the results indicated Mr. McClennen received $7,788.00 worth of community assets and Mrs. McClennen $21,250.00.

As such, the appellate court found Mrs. McClennen’s contention that the division was uneven as to her share was not supported by the evidence.

The trial court is not required to divide the property evenly, only equitably, and since the trial court did not abuse its discretion an appellate court will be unwilling to interfere.

At the time of trial, Mrs. McClennen was living in an apartment in Phoenix Towers.

The apartment house was what is known as a cooperative apartment.

Instead of purchasing real estate the parties purchased, as evidence of the ownership, shares in a corporation.

A stock certificate was offered at trial showing the parties owned, as joint tenants with the right of survivorship, 362 shares of Phoenix Towers Cooperative Apartments, Inc. stock.

The right of a husband and wife to hold property as joint tenants in derogation of their community property status is recognized provided that it clearly appears that the spouses agreed that the property should be taken in that manner. Collier v. Collier, 73 Ariz. 405, 242 P.2d 537 (1952); DeMarce v. DeMarce, supra.

Mrs. McClennen’s motion for a new trial based on newly discovered evidence was founded upon her discovery of the proprietary lease on the apartment which was entered in conjunction with the issuing of the shares of stock in the cooperative apartments.

Mrs. McClennen claimed that the lease on its face showed that the parties own the property as community property and not as joint tenancy with the right of survivorship.

The Appellate Court found that Mrs. McClennen’s position that this was “newly discovered evidence” was entirely without merit since at the trial she herself introduced in evidence the stock certificate to the cooperative apartments which did not contain any acceptance by the McClennen’s of the stock certificate as joint tenants in derogation of their rights to hold the same as community property.

This should have been enough to raise in the mind of Mrs. McClennen some question as to whether the property was in fact held as joint tenancy with the right of survivorship.

The appellate court believed that Mrs. McClennen could have discovered prior to the time of the trial the fact that the property was not held in joint tenancy with the right of survivorship.

The appellate court also stated an additional reason why the trial court did not abuse its discretion in failing to grant a new trial as to the issue of the Phoenix Towers apartment.

At the trial of this case, Mrs. McClennen consistently took the position that the property in question was held in joint tenancy with the right of survivorship.

It is only when she had a new attorney represent her at the motion for a new trial that she took the position it was community property.

At trial, Mrs. McClennen claimed she needed approximately $3,000.00 in support money for herself and the parties’ child.

Mr. McClennen’s evidence was that his net monthly income after taxes amounted to $2,504.17 per month without including any income from the two trusts of which he was a beneficiary.

If the trusts were to be included in his income, his monthly income would show a net after taxes of $3,500.00.

Mr. McClennen also introduced evidence showing his monthly expenses to be in the sum of $5,495.00.

Mrs. McClennen’s basic argument was that as to spousal maintenance and support she was entitled to that amount of money which would keep her in the lifestyle and manner to which she was accustomed.

There was also testimony at the trial that the parties constantly lived beyond their means.

While one factor in an award of spousal maintenance takes into consideration keeping the same standard of living the parties’ shared during the marriage, the appellate court disagreed that Mrs. McClennen was entitled to live beyond her means merely because she had done so in the past.

Factors to be considered in determining both spousal maintenance and child support include the needs of the party claiming a need for support, their ability to support themselves, the ability of the party requested to pay and other circumstances including their standard of living. Kennedy v. Kennedy, 93 Ariz. 252, 379 P.2d 966 (1963).

Considering all the evidence the appellate court did not believe that the trial court abused its discretion in arriving at the amounts of spousal maintenance and child support awarded to Mrs. McClennen in the matter.

Tax Consequences Implicated by an Award of Spousal Maintenance

Finally, Mrs. McClennen contended that the trial court took a tax advantage away from her by allowing Mr. McClennen to deduct from the amount of spousal maintenance to which she was to receive the sum of $200.00 per month until the total sum of $15,000.00 has been paid for her portion of the community debts.

The appellate court could not discern any credibility to her argument, as it made no difference whether Mrs. McClennen received all the spousal maintenance directly and then paid $200.00 per month on the community debts or whether Mr. McClennen paid it for her since under either method, the $200.00 is taxable to her.

Chris Hildebrand wrote the information on this page about dividing the accounts receivable of a business in a divorce to ensure everyone has access to information about community property law and divorce in Arizona. Chris is a divorce and family law attorney at Hildebrand Law, PC. He has over 24 years of Arizona family law experience and has received multiple awards, including US News and World Report “Top Arizona Divorce Attorneys”, Phoenix Magazine “Top Divorce Law Firms”, and Arizona Foothills Magazine “Best of the Valley” award. He believes the policies and procedures he uses to get his clients through a divorce should all be guided by the principles of honesty, integrity and actually caring about what his clients are going through in a divorce or family law case.