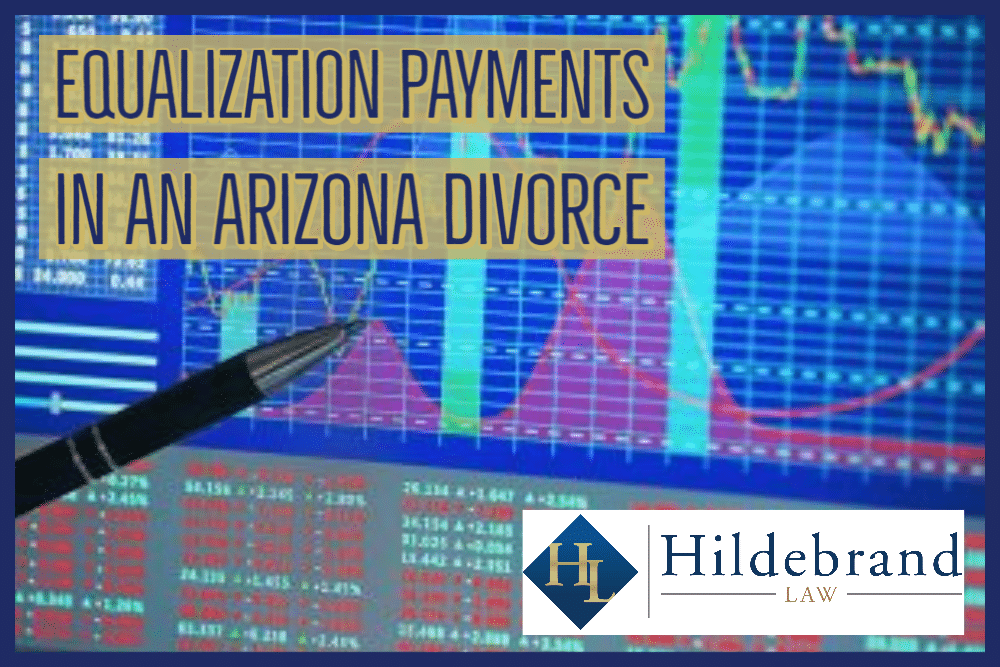 Equalization Payments in an Arizona Divorce

We want to talk to you about equalization payments in an Arizona divorce. Sometimes one spouse ends up with more of the property, in terms of the value of the property, in a divorce in Arizona. To be fair and equitable to both spouses, a judge has the authority to order one spouse to make equalization payments to the other spouse to correct their division of property.

The calculation of that equalization payment will be an amount to make the overall property division equal or substantially equal in a divorce in Arizona. Read the Arizona Court of Appeals memorandum decision in the case of Lee v. Lee below.

In this divorce case, Mr. Lee (“Husband”) challenges the superior court’s rulings regarding the treatment of a community business and the award of spousal maintenance. Ms. Lee (“Wife”) cross-appeals the court’s division of community property.

We vacate the property division orders because the court adopted a business valuation unsupported by the evidence, and potentially double counted community real estate. We vacate the spousal maintenance order based on the decree’s internal inconsistencies. We remand for further proceedings with respect to the foregoing, but we affirm the court’s rulings on all other issues raised.

Husband and Wife married in 1991. They thereafter purchased a mail-delivery business, White Mountain Passenger Lines, Inc. (“White Mountain”), and a lot on which to store the company’s vehicles. Wife petitioned for dissolution of the parties’ marriage in 2013.

The matter proceeded to trial in January 2016. The parties’ jointly retained valuation expert, John Casalena, opined that as of December 2014, White Mountain had a fair market value of $173,000. Casalena included the lot in his analysis. Both parties disagreed with Casalena’s calculation: Husband testified that he believed Casalena’s figure was too high, while Wife testified that she believed White Mountain was worth approximately $1 million. Neither party retained another expert to support their contentions.

The court is not convinced those are appropriate deductions for valuation purposes. For that reason, the Court added them back into the corporate discretionary earnings and recalculated the seller’s discretionary earnings for years 2011, 2012 and 2013 and averaged them out to $63,289. Using the same multiplier as [Casalena] . . . the Court determines the Fair Value of [White Mountain] to be 191,768.

The court concluded that “the way to resolve [the] property issues quickly and with the least chance of ongoing litigation is to award [White Mountain] to [Husband], the marital residence to [Wife] and to use the Commercial property [the lot] to achieve equity.”

Plan 2 – If [Husband] is not able to buy [Wife] out within 120 days, the marital residence and commercial property are to be sold in a commercially reasonable manner. . . . Upon the sale of either parcel, the above-listed debts (excluding the car payment) are to be paid out of escrow and the parties will divide the remaining equity.

The court also ordered Husband to pay spousal maintenance in the amount of $1,600 per month for 60 months but reduced the amount to $600 per month upon Wife’s receipt of regular monthly payments for “her equity in the home and commercial property.”

The court further held that “[o]nce Wife begins receiving regular monthly payments from her share of the corporation, her eligibility may reduce further.” The court’s child support calculation adjusted Husband’s income by only $600 “for spousal maintenance paid.” The court also found a substantial disparity in income and ordered Husband to pay $1,000 of Wife’s attorney’s fees and costs.

Both parties moved to amend the decree under ARFLP 83. Husband contended that the lot was an asset of White Mountain and thereby should not have been included in the equalization payment, that the court’s valuation of White Mountain was contrary to the evidence, and that the spousal maintenance award exceeded his ability to pay.

Wife contended that the court should have implemented an unequal division of community property because Husband wasted community assets. She also sought clarification regarding the two equalization methods, and she sought an increase in the award of attorney’s fees and costs. The court granted both motions in part, ruling that the lot was a White Mountain asset and increasing Wife’s share of White Mountain to $133,384.

The superior court granted Husband’s motion for reconsideration but held that it had not counted the lot’s value multiple times: The Court originally ruled that the reasonable value of the business is $191,768.00 excluding [the lot].

The Court again recognizes that the figure is different from the value proffered by Mr. Casalena (which included the parcel) but again finds that (after considering the testimony of Mr. Casalena, and the parties, as well as bank records, contracts, and the business practices) that Mr. Casalena’s valuation report is valuable and informative but not dispositive.

Husband contends that the superior court erred by deviating from Casalena’s opinion of White Mountain’s value and by including the lot’s value in both the White-Mountain valuation and the equalization payment calculation. We review a business value determination in a divorce proceeding for an abuse of discretion. Schickner v. Schickner, 237 Ariz. 194, 197 (App. 2015).

We will defer to the superior court’s factual findings unless they are clearly erroneous. Id. A finding is clearly erroneous if no substantial evidence supports it. Id. at 197–98. The court was free to give Casalena’s opinion “whatever weight it thought best.” City Consumer Servs., Inc. v. Metcalf, 161 Ariz. 1, 5 (1989). Here, the court modified Casalena’s opinion on the ground that it improperly omitted certain amounts that White Mountain deducted on its tax filings for “outside services.”

Casalena testified that those amounts were misclassified and unusually high. But he also explained that the amounts had no bearing on his assessment of the company’s value, and no other evidence established their relevance. Though the court was free to reject Casalena’s opinion in whole or in part, it could not adopt a modified version of his opinion in the absence of evidence to support the modified value. Accordingly, because no other evidence bore on the issue, the court’s “outside services” adjustment was an error.

That modification to Casalena’s opinion, however, was nowhere stated in the original decree or explained in the later orders. The court may well have omitted the lot in the first instance, but on this record, we are ill-equipped to confirm whether that was the case.

And if the court did not omit the lot, its inclusion in the equalization payment calculation was an error. We vacate the court’s orders regarding division of the community property. We remand so that the court may determine White Mountain’s value based on the evidence, and establish and explain an equalization scheme that accounts for the lot’s value once.

While the decree required Husband to pay $1,600 per month for 60 months, it also provided that Husband’s maintenance obligation would be reduced to $600 per month “once [Wife] receives her equity in the home and commercial property” and that further reductions may be appropriate “[o]nce she begins receiving regular monthly payments from her share of the Corporation.”

Wife first contends that the superior court should have awarded her half of approximately $75,000 in “abnormal expenses” she contends Husband incurred using White Mountain accounts. The superior court must divide community property “equitably, though not necessarily in kind” absent a compelling reason to do otherwise. A.R.S. § 25-318(A); Kelly v. Kelly, 198 Ariz. 307, 309 (2000).

Wife presented evidence showing that Husband incurred significant personal expenditures on White Mountain accounts. Husband, however, testified that after Wife filed for divorce, he reimbursed the company in full for his personal expenditures. The court reviewed the relevant evidence and determined it could not find “that those amounts were not either paid back to the Corporation or counted as part of [Husband’s] compensation as an employee.”

The court had the discretion to accept Husband’s testimony on those matters. See Vincent v. Nelson, 238 Ariz. 150, 155 (App. 2015) (“[T]he family court is in the best position to judge the credibility of witnesses and resolve conflicting evidence, and appellate courts generally defer to the findings of the family court.”).

Wife next contends that the superior court’s award of attorney’s fees under A.R.S. § 25-324 was too modest. The court may award attorney’s fees under § 25-324(A) “after considering the financial resources of both parties and the reasonableness of the positions each party has taken throughout the proceedings.” We will not disturb the court’s award absent an abuse of discretion. Gutierrez, 193 Ariz. at 351.

According to Wife, she was entitled to an award of “at least $11,000” because “the evidence clearly supported a determination that Husband had taken an unreasonable position.” But Wife cites no specific evidence demonstrating any such positions. We, therefore, find no abuse of discretion.

Wife finally contends that the superior court erred by not awarding her post-judgment interest on the equalization payment. We need not reach that issue because we vacate and remand the property division orders. We vacate the court’s orders dividing community property and awarding spousal maintenance, and we remand for further proceedings consistent with this decision. We otherwise affirm.

Both parties request attorney’s fees on appeal under § 25-324(A). Though neither party took unreasonable positions on appeal, the record indicates that Husband earns at least twice as much as Wife. We, therefore, will award Wife a reasonable amount of attorney’s fees upon compliance with ARCAP 21.