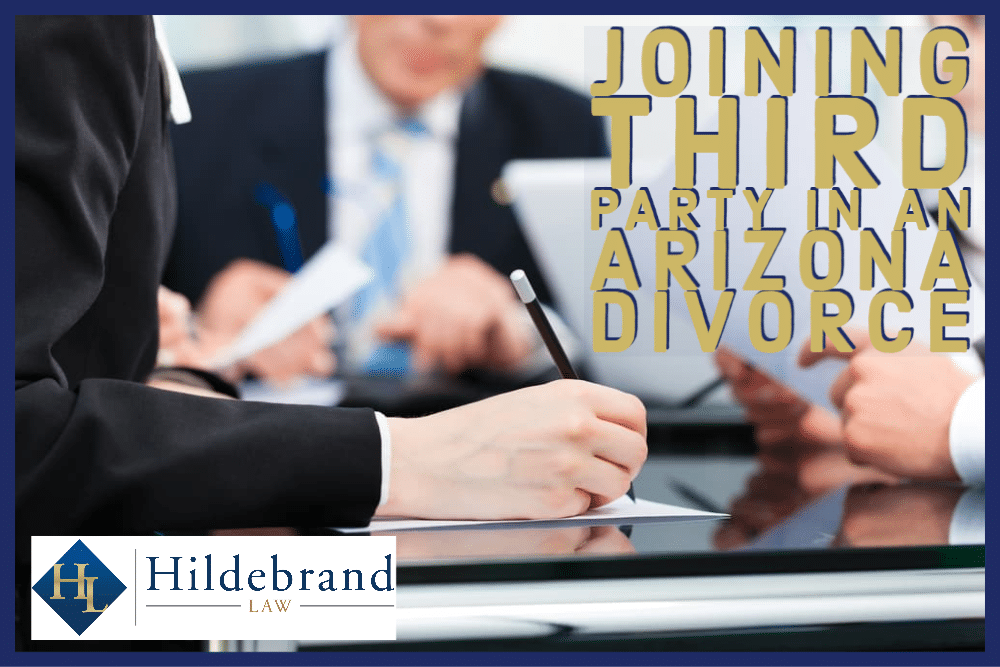 There are situations that arise in a divorce when you may need to join a third party in the divorce to ensure justice is done in the divorce.

One such situation arose in the case of DiPasquale vs. DiPasquale.

In the DiPasquale case, a former wife was seeking to collect unpaid spousal maintenance from her former husband.

During the case, the wife asked the trial court to allow her to file a third-party complaint against Husband’s new wife.

She sought to do this because she wanted to be able to investigate and make claims against the community property of the couple to collect on the unpaid spousal maintenance.

The trial court denied the former wife’s request to join her for husband’s new wife into the family law case.

On appeal, the Arizona Court of Appeals found that the former wife had a legal basis to collect past due spousal maintenance from community property accumulated during the former husband’s current marriage.

Rule  33(A) of the Arizona Rules of Family Law Procedure

The Arizona Court of Appeals found that Rule 33(A) of the Arizona Rules of Family Law Procedure allows a divorce judge to permit a party to a divorce case to make a statutory legal claim against a third party related to the divorce case.

However, it is still within the judge’s discretion whether such a third-party claim can be filed in the divorce case; as opposed to a separate legal action.

In the prior case of Flexmaster, the Court of Appeals found that a non-debtor spouse (i.e., the new wife) is a necessary and proper party in a suit to establish the limited liability of the community property for separate premarital debts.

The court held that is was also much more efficient to handle those claims in the family law case than to spur another civil lawsuit to address the former wife’s claims.

The Court of Appeals also rejected the trial judge’s decision that the collection of the spousal maintenance from the community property created during the husband’s new marriage was not an issue for the family court to handle.

It appears the family law court concluded that the claim was more of a civil lawsuit that should not be part of a family court case.

Claims Against Third-Party Must be Related to the Divorce

Now, this case does not mean you can combine any cause of action against a third party in your divorce.

The lawsuit against a third person must contain issues related to an issue in the divorce case.

In this case, the issue of collecting overdue alimony from the community property created during the husband’s new marriage was sufficiently related to the spousal maintenance enforcement action that the former wife should have been able to file a third-party lawsuit against the former husband’s new wife to collect on overdue alimony from a portion of the community property owned by the former husband and his new wife.