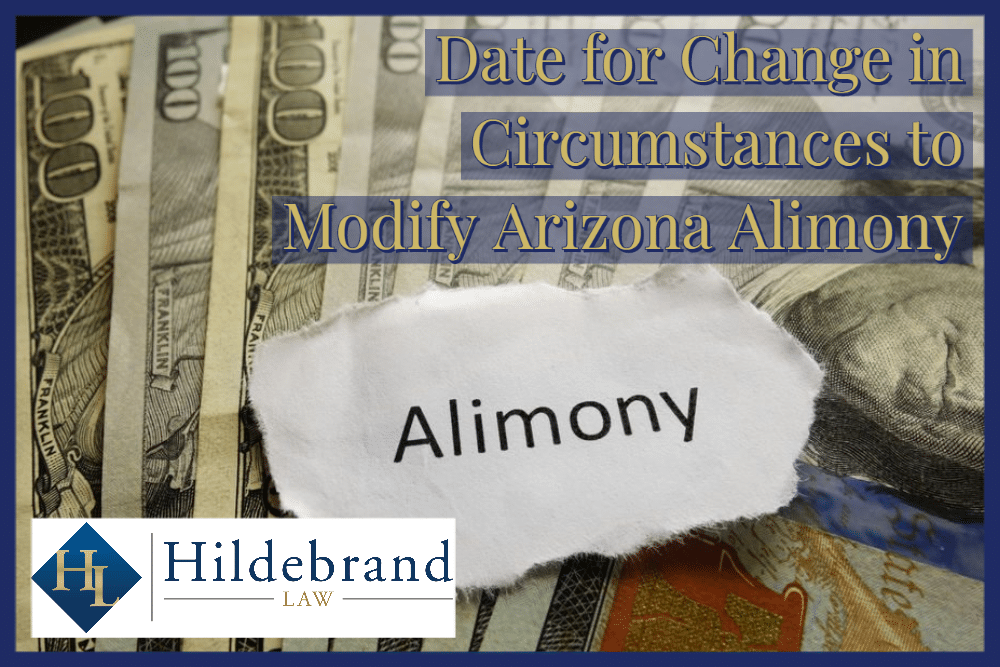 The short answer to the question of what date does a court use to establish a change in circumstances to modify alimony in Arizona is the date the original spousal maintenance orders were issued in a divorce decree or decree of legal separation and not as to any subsequent dates that spousal maintenance order had been modified. Learn more about the Arizona Court of Appeals decision in the case of McClendon vs. McClendon below.

The clients, in this case, are S.L. McClendon (“Wife”) and C.P. McClendon (“Husband”). The couple entered a consent decree ending their marriage in 2007 after being married 30 years. At that time, Husband was employed as a city manager in AZ. No employment for Wife was indicated.

Discussion of the Date to Modify Spousal Maintenance in Arizona

Husband retired in AZ, in February of 2014 and moved to California to accept another city manager position. At this time, Husband petitioned to modify the spousal maintenance amount. Wife was now working full time and also receiving her share of Husband’s Arizona retirement.

Within six months of Husband’s February 2014 petition, both parties entered into a binding Rule 69 agreement, which is a settlement between parties in a family law case. This means that “the agreement is final and the Court will not change it unless one party can prove that there is a defect in the agreement.”

A defect would be a number of reasons why the agreement was not fair to one party or the other. At this time, Husband’s spousal maintenance obligation was reduced to $4000 per month, though the length of time the spousal maintenance would continue was indefinite.

After approximately two years had passed, in 2016, Husband once again petitioned to modify the spousal maintenance obligation. Husband testified at the evidentiary hearing that though Wife only worked part-time prior to the divorce in 2007, she had been working full-time since before the 2014 agreement and had received a raise which provided her with a monthly wage of $2900 per month.

The court also denied Wife’s request for attorney’s fees. The orders were based on A.R.S. § 25-319 findings which protect a spouse for a variety of reasons by granting spousal maintenance. In this case, the wife was initially in need of that protection, but Husband insisted that Wife had since become self-sufficient. Wife appealed.

Wife insisted that the superior court erred in three ways. First, she argued that the court used the original 2007 Consent Decree to base the new orders on, instead of the 2014 Modification Order. In order for Husband to modify the spousal maintenance, it would be necessary for him to prove a substantial and continuing change existed to support that modification.

Therefore, the 2007 Order was used to modify the spousal support in 2014 and could not be used again to modify the spousal support in 2016. As § 25-327 does not provide any specific point in time from which to assess the ”changed circumstances” in this case the superior court concluded that “the relevant time period for assessing change is the time from dissolution {2007} to present, not from {2014} to present.”

Secondly, Wife argued that the court erred when they technically terminated the alimony by ordering a deadline of only 12 more months of spousal support following the 2016 Order. Since the parties had entered into a binding Rule 69 agreement in 2014, and as of yet Husband had not proven a changed circumstance that was substantial and continuing, the spousal maintenance could not legally be terminated.

Thirdly, Wife reiterated her request for attorney fees. She argued that since the court had erred in their 2016 Orders, she should not be denied the attorney’s fees she is entitled to.

The Decision on the Date to Modify Spousal Maintenance in Arizona

The superior court’s 2016 Order was reversed remanded for the court to reconsider because the superior court misapplied the law in assessing whether Husband had presented a substantial and continuing change in circumstances. Since the case was remanded to the superior court, Wife’s reasonable attorney’s fees she incurred on appeal were awarded.

If you have questions about change in circumstances to modify alimony in an Arizona divorce case, you should seriously consider contacting the attorneys at Hildebrand Law, PC. Our Arizona spousal maintenance and family law attorneys have over 100 years of combined experience successfully representing clients in spousal maintenance and family law cases.