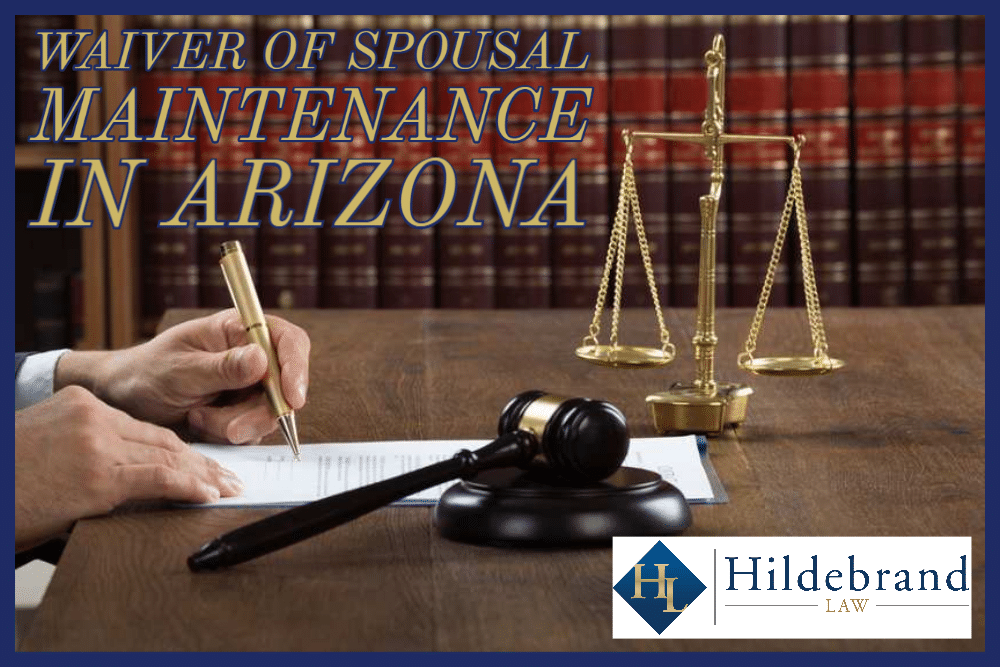 Learn About a Waiver of Spousal Maintenance in Arizona

The Arizona Court of Appeals in a Memorandum Decision in the case of Morrow vs. Morrow had to address whether spousal maintenance payments in Arizona can be waived by the person ordered to receive those alimony payments.

The following constitutes the Arizona Court of Appeals decision on waiver of spousal maintenance in Arizona.

Appellant Douglas Morrow (“Husband”) appeals from the superior court’s orders granting a modification of spousal maintenance and denying his motion for a new trial.

For the following reasons, we affirm in part and remand in part. Cynthia Morrow (“Wife”) filed for divorce in 2012.

At the time, the parties had two adult children.

Prior to the divorce trial, Wife was granted the exclusive use and possession of the marital residence and was ordered to pay Husband $2,000 per month in temporary spousal maintenance.

Although Husband holds Bachelor’s and Master’s Degrees, at the time of his pretrial statement, he had not been employed or applied for a job since 2001.

Husband testified during the trial that he had a serious car accident in 2000 that required multiple surgeries.

Husband applied for social security disability in 2005 but was denied benefits in 2006.

The court issued its decree in December 2013.

Based on the evidence presented at trial, the court awarded Husband $4,000 per month in spousal maintenance for an indefinite term based on the court’s finding that Husband was unlikely to achieve financial independence.

In the decree, the court also noted Husband’s medical issues and lack of employment since 2001.

On January 29, 2014, Husband left Wife a voicemail stating he had told his attorney to put spousal payments “on hold” and he was going to “hold off” on seeking to collect his spousal maintenance award.

The wife did not pursue her appeal. In March 2014, this Court deemed both the appeal and cross-appeal abandoned and dismissed the appeals.

In June 2016, Husband and Wife exchanged a series of text messages where the Husband asked Wife for financial help.

During the text exchange, Husband brought up the “alimony” but never requested back pay or maintenance going forward.

In March 2017, Husband filed a contempt petition alleging that Wife failed to pay spousal maintenance and requested a judgment for $156,000 in unpaid spousal support.

The wife answered the petition, arguing that Husband failed to request a single spousal support payment in the previous 39 months and that she believes Husband had been working since shortly after the dissolution of their marriage.

Along with her answer, Wife filed a counter-petition for modification of spousal maintenance based on substantial and continuing changes in circumstances.

After an evidentiary hearing on Husband’s contempt motion and Wife’s modification petition, the superior court denied Husband’s request to find Wife in contempt related to the spousal maintenance payments and found that Wife establishedwaiver and estoppel on any maintenance arrearages by clear and compelling evidence.

The court, after analyzing Arizona Revised Statutes (“A.R.S.”) section 25-319(B) factors, determined that Wife was entitled to a modification of spousal maintenance and reduced the award from $4,000 per month to $0 per month.

The court also awarded Wife a portion of her reasonable attorneys’ fees based on Husband’s unreasonable conduct.

Husband filed a notice of appeal regarding the spousal modification.

Husband amended his notice of appeal to include the denial of the motion for a new trial and the attorneys’ fee award.

The superior court denied Husband’s request to find Wife in contempt for failure to pay spousal maintenance arrears by applying the equitable defenses of waiver and estoppel.

Husband argues the court erred in finding waiver and estoppel prevented him from asserting a claim for spousal maintenance arrears.

We will not disturb the superior court’s factual findings supported by the record, even if based on conflicting evidence, and we will give due regard to the court’s opportunity and ability to judge witness credibility. See Concannon v. Yewell, 16 Ariz. App. 320, 321 (1972); Gutierrez v. Gutierrez, 193 Ariz. 343, 347 (App. 1998).

Retroactive Waiver of Alimony in Arizona

To establish waiver, Wife must show that Husband “voluntarily and intentionally abandoned a known right.” Id. at 28.

Husband left Wife a voicemail in January 2014 stating he instructed his attorney “to get that garnishment on hold”3 and he was going to “hold off on the garnishment” for his spousal maintenance payments.

In May 2017, Husband filed a petition for an income withholding order, requesting the $4,000 monthly spousal maintenance payment from Wife. Husband relies on Ray to argue Mother’s belief that Husband waived spousal maintenance is not enough to meet the clear and compelling burden. 163 Ariz. at 333 (“Where conflicting testimony exists and the parties’ unspoken assumptions and intentions conflict, one party’s belief [that the other waived child support] cannot provide clear and compelling evidence of [a waiver].”).

In Ray, the parties entered into a child support modification agreement almost ten years after their divorce wherein the father agreed to pay the mother $450 per month in child support. Id. at 330-31.

At trial, the mother and the parties’ daughter testified that the father agreed he would pay back child support during their meeting to discuss the modification agreement. Id. at 332-33. The Arizona Supreme Court found that there was no clear and compelling evidence that the mother waived her claim for past-due child support. Id. at 333.

We find the facts of this case more analogous with Cordova. In Cordova, the father stopped making child support payments after the mother sent him a letter stating she did not want support payments. 129 Ariz. at 185.

After more than three years, the mother made a claim for child support arrearages. Id.

We held that the mother waived her claim to child support arrearages by expressly stating she did not want child support, and then waited approximately three-and-a-half years without making any further claim. Id. at 186.

After the mother revoked the waiver, the father started making child support payments again. Id. at 185.

Ruling on a Waiver of Spousal Maintenance

We remand this matter to the superior court to determine the amount of spousal maintenance due to Husband for the time period between the revocation of his waiver and garnishment of Wife’s wages.

Husband next contends the superior court erred in determining that he was estopped from claiming spousal maintenance arrears. The requirements for estoppel are:

(1) conduct by which one induces another to believe in certain material facts;

(2) the inducement results in acts in justifiable reliance thereon; and

Like waiver, equitable estoppel bars the recovery of support “only when there is clear and compelling evidence in the record to support such a determination.” See State ex rel. Dep’t of Econ. Sec. v. Dodd, 181 Ariz. 183, 187 (App. 1994).

Husband, citing dicta in an unpublished memorandum decision, argues Wife unjustifiably relied on his verbal promise to forego spousal maintenance because Wife and her attorney “knew and understood the necessity of formalizing their agreement.” In re Marriage of Richardson v. Richardson, 1 CA-CV 16-0215 FC, 2017 WL 586423, at 3 (Ariz. App. Feb. 14, 2017) (mem decision).

We find Richardson to be inapposite to this matter.

First, Richardson is a child support matter, which has different policy considerations from spousal maintenance. Id. at 1.

The father in Richardson never appealed the original support obligation, unlike Wife in this matter. Id. at 1.

Additionally, text messages exchanged between the Richardson parties show that the father understood that the agreement needed to be formalized in court, but failed to do so; there are no similar text messages in this matter. Id. at 2-3.

In Richardson, we found the superior court did not abuse its discretion in declining to apply estoppel. Id. at 3.

Given the factual and policy differences between this matter and Richardson, we do not find Richardson persuasive.

In this case, Wife testified that Husband’s voicemail putting the garnishment “on hold” induced her into not pursuing her appeal.

The wife was injured in relying on Husband’s voicemail because she forever lost the ability to have a higher court review of the spousal maintenance award.

Given the Wife’s justified reliance on Husband’s voicemail and the injury she incurred in not pursuing her appeal, the superior court did not abuse its discretion in applying estoppel.

Husband is estopped from asserting a claim for spousal maintenance arrearages from the time he waived the maintenance obligation until he filed his contempt petition.

At that point, Wife no longer could have reasonably relied on the Husband’s waiver.

We review the superior court’s ruling modifying spousal maintenance for abuse of discretion. In re Marriage of Priessman, 228 Ariz. 336, 338 (App. 2011).

We defer to the court’s factual findings unless they are clearly erroneous or unsupported by substantial evidence. Bobrow v. Bobrow, 241 Ariz. 592, 595 (App. 2017).

Husband argues the superior court had no basis to modify his spousal maintenance award from $4,000 per month to $0.

Spousal maintenance “may be modified or terminated only on a showing of changed circumstances that are substantial and continuing[.]” A.R.S. § 25–327(A) (emphasis added). “The burden of proving changed circumstances is on the party seeking a modification.” Scott v. Scott, 121 Ariz. 492, 494 (1979).

The amount and duration of spousal maintenance are determined pursuant to A.R.S. § 25–319(B).

The superior court’s minute entry demonstrates it considered those factors when reaching its determination.

Specifically, at the 2013 trial, Husband provided evidence that he was unable to work and presented medical testimony to support his allegation.

However, within months of the decree throughout the 2017 hearing, Husband worked continually, despite a variety of medical conditions. A.R.S. § 25-319(B)(3).

Husband will also receive additional funds upon the sale of the marital residence and after the division of Wife’s retirement accounts by a Qualified Domestic Relations Order. A.R.S. § 25- 319(B)(9).

The court also determined that Husband has maintained appropriate employment to meet his needs. A.R.S. § 25-319(B)(10).

The superior court did not abuse its discretion in modifying the spousal maintenance award.

Evidence presented at the hearing supports the court’s findings that Husband went from not working to obtaining employment where he made enough to meet his needs and achieve financial independence.

A motion for a new trial may be granted for the following reasons:

(1) irregularity in the proceedings or abuse of discretion that deprived moving party of a fair trial;

(5) error in the admission or rejection of evidence or other errors of law; or

On appeal, we view the evidence in the light most favorable to supporting the superior court’s decision. See Sommerfield v. Sommerfield, 121 Ariz. 575, 577 (1979).

As explained above, the superior court did not err in determining that the equitable defenses of waiver and estoppel applied to Husband’s claim for spousal maintenance arrearages.

Additionally, Wife showed substantial and continuing changed circumstances to warrant the spousal maintenance modification. Therefore, we hold the court did not abuse its discretion in denying Husband’s motion for a new trial.

Husband requests an award of his attorneys’ fees and costs on appeal pursuant to A.R.S. § 25-324.

Wife requests an award of her attorneys’ fees and costs pursuant to A.R.S. § 25-324 and Arizona Rule of Civil Appellate Procedure (“ARCAP”) 21.

After considering the parties’ financial resources and reasonableness of their respective positions, we decline to award attorneys’ fees to either party.

We award costs to Wife in compliance with ARCAP 21.

For the foregoing reasons, we affirm in part and remand in part.