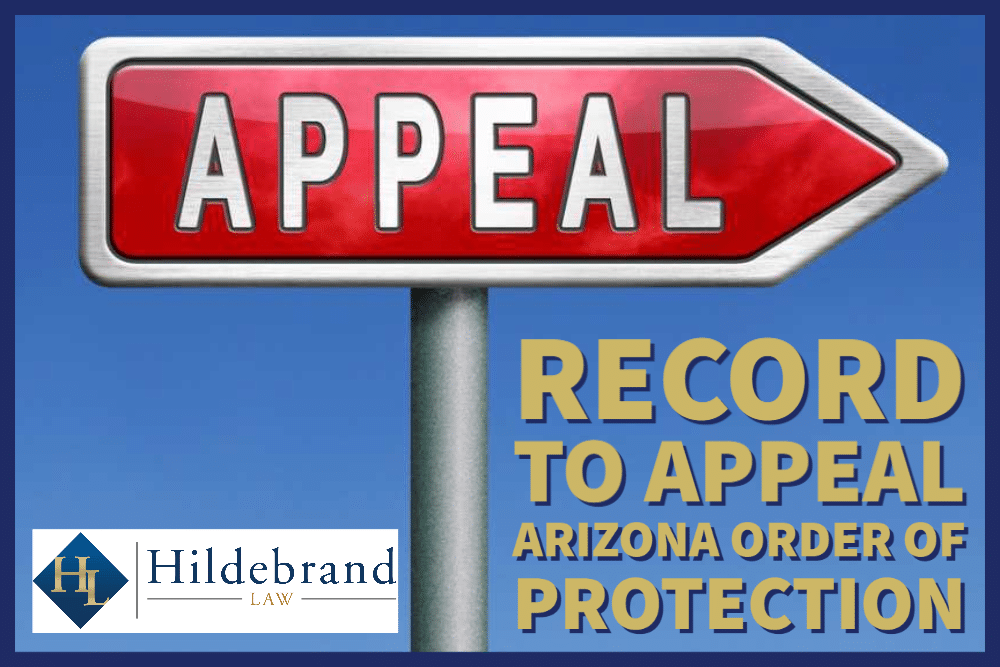 provide the entire record, including the entire court transcript from the trial and any exhibits that were used in that trial you are appealing. Read the Arizona Court of Appeals memorandum decision in the case of Chandler vs. Ellington to learn more about parts of the record to include in an Appeal of an Order of Protection in Arizona.

Ms. Chandler, the mother of Ellington’s children, filed a petition for an order of protection against Ellington for herself and their children, I.E. and C.E. She alleged Ellington had a history of threatening and violent behavior towards her, threatened her the week preceding the petition, and physically and verbally abused C.E. during the same period.

She also requested the court order Mr. Ellington not to possess firearms and ammunition. The court granted an ex parte order of protection and subsequently scheduled a hearing on the petition.

Mr. Ellington argues there was insufficient evidence to support continuing the superior court’s order, and the inclusion of C.E., thus the court violated Rules 35(b)(1)(2) and 5(b)(1), respectively. He also argues Rule 21(c) is unconstitutional.

We review the superior court’s decision to affirm an order of protection for an abuse of discretion. Cardoso v. Soldo, 230 Ariz. 614, 619 (App.

2012). “The court abuses its discretion when it makes an error of law in reaching a discretionary conclusion or when the record, viewed in the light most favorable to upholding the trial court’s decision, is devoid of competent evidence to support the decision.” Michaelson v. Garr, 234 Ariz. 542, 544 (App. 2014) (internal quotations and citation omitted).

If the appellant fails to do so, this Court will assume the evidence was sufficient to support the court’s findings. Kline v. Kline, 221 Ariz. 564, 572 (App. 2009). We accordingly affirm the superior court’s continuation of the March 2017 order of protection. See id.

Ellington argues Rule 21(b)(1)(2) is unconstitutional because it “destroys blatantly prior legal decisions of Family Court Judges, undermining relevant facts and opinions of matters found with factual basis and direct evidence . . . .” He did not, as far as the record reveals, present any rulings from the family court, which may be relevant, and does not provide any argumentation or case law supporting this assertion; therefore, we will not consider it. See In re U.S. Currency in Amount of $26,980.00, 199 Ariz. 291, 299 (App. 2000) (declining to consider appellant’s “bald assertion [that was] offered without elaboration or citation to any constitutional provisions or legal authority”). In light of the foregoing, we affirm the superior court’s continuation of the March 2017 order of protection.

Call us today at (480)305-8300 or reach out to us through our appointment scheduling form to schedule your personalized consultation and turn your Arizona restraining order or family law case around today.

Chris Hildebrand wrote the information on this page about the record needed to file an appeal in a divorce in Arizona to ensure everyone has access to information about family law in Arizona. Chris is a divorce and family law attorney at Hildebrand Law, PC. He has over 24 years of Arizona family law experience and has received multiple awards, including US News and World Report “Top Arizona Divorce Attorneys”, Phoenix Magazine “Top Divorce Law Firms”, and Arizona Foothills Magazine “Best of the Valley” award. He believes the policies and procedures he uses to get his clients through a divorce should all be guided by the principles of honesty, integrity, and, quite frankly, actually caring about what his clients are going through in a divorce or family law case. In short, his practice is defined by the success of his clients. He also manages all of the other attorneys at his firm to make sure the outcomes in their clients’ cases are successful as well.