Getting an Order of Protection Against an Abusive Stepchild in Arizona

Home » Getting an Order of Protection Against a Stepchild in Arizona

Getting an Order of Protection Against a Stepchild in Arizona 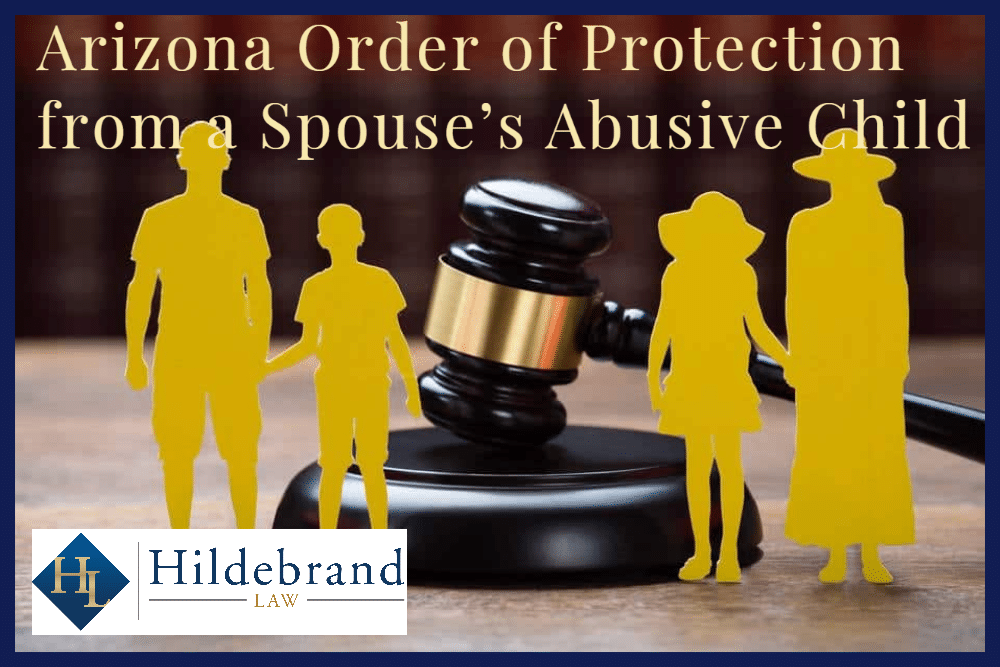 Getting an Order of Protection Against a Stepchild in Arizona

Make a blended family work well can be challenging.

So, what can you do to protect your self or your own child from an abusive stepchild in Arizona?

One option available to you is to get an Order of Protection against the abusive stepchild.

Protecting a Child from an Abusive Stepbrother

In one case decided by the Arizona Court of appeals, Mother and Father shared joint legal custody of their biological daughter.

Mother filed for an order of protection against Father when she became concerned her 14-year-old step-son may be sexually abusing their daughter.

Mother’s sole claim was that Father was aware of the abuse and failed to report it. Mother wanted to protect their daughter from further abuse.

The court found there was reasonable cause to support the claim that domestic violence could reasonably occur in the future. The court therefore granted the Order of Protection against father and the stepbrother.

The order prohibited the father and step-son from having any contact with their daughter.

The court also issued a Positive Brady Indicator with regards to Father which barred him from owning or possessing firearms.

Father requested a hearing to contest the Order of Protection and himself and his son.

At the hearing Mother testified that Father intimidated and harassed her.

She claimed Father came to her house to pick up their daughter after Mother told him she and the child had plans.

She also claimed Father called her several times and sent multiple text messages while waiting outside her house.

Lastly, she claimed Father called Mother’s parents and told him he would be calling the police.

However, the court found there was reasonable cause to believe that the step-son was exhibiting aggressive behavior toward his stepsister.

The court also concluded Father was aware of this behavior and failed to protect their daughter. As a result, the judge affirmed the order of protection and order restricting father from owning or possession a firearm.

On appeal Father claims the trial court abused its discretion.

An abuse of discretion occurs when a judge applies the law incorrectly or when evidence, viewed in the light most favorable to sustain the judge’s decision, cannot support the trial judge’s decision.

In Arizona a defendant must have committed one of the statutory offenses described in A.R.S. 13-3601 before a trial judge can enter an Order of Protection against Father or his son.

Father claims that since he did not commit an act of domestic violence towards Mother, the order is void. The appellate court agreed because Mother’s petition did not contain any allegations that Father’s actions constituted an offense prescribed in Arizona Revised Statute Section 13-3601.

The Arizona Court of Appeals determined the trial judge violated Father’s constitutional right to due process when the judge allowed Mother’s attorney to ask her if Father ever made her feel harassed, intimidated, or bothered. Father’s due process rights were violated because Mother had not included such generalized statements in her Petition for Order of Protection.

Father also claimed the trial judge’s order prohibiting him from owing or possessing firearms should be rescinded since he posed no physical threat to Mother.

The Arizona Court of Appeals agreed with Father and quashed that part of the Order of Protection.

After an order of protection has been issued, a judge will sometimes prohibit defendants from possessing firearms and ammunition.

A judge will issue an order preventing a defendant on an Order of Protection from owning or possessing a firearm “only if the order ‘includes a finding that [the] person represents a credible threat to the physical safety of [the] intimate partner or child.”

The rules of procedure allow for a court to inquire about the extent of a defendant’s firearm possession, but only when the defendant is a credible threat.

Call us today at (480)305-8300 or reach out to us through our appointment scheduling form to schedule your personalized consultation and turn your family law case around today.